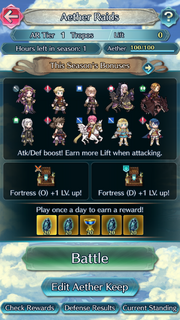 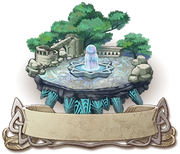 The offense and the defense maps combine to create the battlefield.

Every battle consists of an offense map, and a defense map, which combine together to make the battlefield. The attacker controls the offense map while the defender controls the defense map. If the defender is defeated within seven turns, the attacker wins. If the attacker surrenders, it will count as defeat. Players gain or lose Lift based on these results, climbing to higher tiers and provided with more rewards if the player acquires enough Lift.

Aether Raids requires Aether to participate in battles. At the start of the season, a player's Aether starts with the capacity based on the level of their

Aether Amphorae. It is replenished by a fixed amount once a day, based on the level of the

The amount of Aether it costs to start a battle is calculated as follows, capping out at 50 Aether maximum:

The amount of Aether restored from destroying foe's resources during a battle is calculated as follows, capping out at 10 Aether maximum:

A players Aether Raids tier is based on Lift. When a new season begins, every player between Tier 12 and Tier 21 will start the season with an amount of Lift based on their Tier. Lift is gained by performing a successful raid. A completely successful attack, which no units loss on the attacking side, yields the Maximum Lift amount, which is displayed when forming a raiding party. During the season, other players can attack, and lift is lost if the defensive team fails. Lift can only be lost once per 20 hour period. The Defense Lift Loss is the largest amount of Lift that can be lost given the makeup of the defensive team. On the Edit Defensive Team menu, the Defense Lift Loss is shown.

When entering a battle, the formula for potential Lift Gain for a raiding party is:

For every unit lost during a successful attack, the total Lift gained will be decreased by 20.

Below is an example calculation during the following Season with

Fjorm: Princess of Ice as a bonus unit:

The highest possible lift gained is 190 Lift requiring 3 Mythic units, all fully merged, with 2 other blessed units, and one of those 5 units being a bonus unit.

Auto-Dispatch is an alternative to Battle where the a player's raiding team attacks a randomised enemy defense team through auto-battle without player input. It can be used up to 3 times per season. When an auto-dispatched is called, both the Battle and Auto-Dispatch option will be unavailable for next 20 hours, unless the player chooses to cancel the current auto-dispatch. Cancelling will forfeit all Aether used to auto-dispatch and will not increase a players lift. After 20 hours, when the raiding party has returned, a replay of the player's raiding party auto-battling against the randomly generated defense will be shown. Other differences between the Battle and Auto-dispatch options include:

When defending, the most lift that can be lost in a 20 hour period is:

For every hero defeated during a defense, the player loses 20 less lift. If the defense successfully defends against an attack, no lift is lost.

Example calculation during the following Season with

The lowest possible Lift Lost for defeat is -20 Lift Loss requiring 2 Mythic units, all fully merged, with 4 other blessed units.

Options found when when entering the Edit Aether Keep screen.

The terrain of the Aether Keep can be changed. Some terrain requires Aether Stones to unlock.

Allows players to choose between two setups based on the current season.

Add or remove offensive and defensive structures to the current setup.

Add units to your defense team. By selecting "Lock Team", the defense team will be highlighted with a gold background, signifying that all units current levels, base stats, skills, Sacred Seals, and blessings will not be changed for Aether Raids defense battles. Even if the locked unit levels up, equips different skills, or is sent home, that unit will still exist unchanged in Aether Raids defense battles. However, the stats of the locked unit can change due to bonus allies or blessing effects. On the Edit Defensive Team menu, the Defense Lift Loss is shown.

This option can be accessed through the Help & Extras Menu. This option allows the player to battle their own defense map withe their own raiding party. Testing defense map's defenses will not consume Aether. No Aether will be consumed. Aetheric Lift will not be gained or lost.

This option can be accessed through the Help & Extras Menu. This option allows the player to battle friends defense map that have "Friend Mock Battle" set to On with their own raiding party. Testing defense map's defenses will not consume Aether. No Aether will be consumed. Aetheric Lift will not be gained or lost. Friend's Aetheric List will not be gained or lost, and no replay will be sent to them.

For Fortress level above another player,

When bonus allies are used in Aether Raids, they'll be granted HP+10 and Atk/Spd/Def/Res+4, and the amount of EXP and SP they gain will be doubled.

Fortress (D) by one level.

During the appropriate season, both defense and offense allies get a stat boost from legendary heroes if they are blessed with the correct element. Note that Mythic Heroes are not affected by this blessing and will not receive stat boosts.

During the appropriate season, both defense and offense allies get a stat boost from mythics heroes if they are blessed with the correct element. Note that Legendary Heroes in their correct season are treated as being blessed correctly and will receive stat boosts.

Before a raid starts, players have the option to double the Aether consumed in a fight to double the amount of Lift and Aether gained from the following battle.

See also: What's In Store for the 4.4.0 Update (Notification)

When a player in Tier 17 or below attacks, their Fortress (O) will enjoy a bonus in level of up to +4.

Explanation of elements on the Defense results screen.

Each season, players can watch how other players attacked their defense keep by tapping the Replay button for battle results listed on the Defense Results screen. This lets players watch the battle as it happened, as well as pause after every action. Each replay also notes how many foes was defeated, if the defense succeeded or failed, and how much lift was lost. All replays are erased once the season ends.

After a players defense keep has been attacked by another player, whether the defense was a Success or a Failure, the defense keep becomes immune to lift loss for the next 20 hours. This is stated by the words "Lift Loss Control Active", followed by Lift being displayed as -0.

Players can rematch those that have defeated their defenses one time. This acts as a regular battle and will consume the regular amount of Aether and has the same Lift gain. If the same opponent appears on the defenses list multiple times, they can only be challenged to a rematch once. For defense results that are a result of a rematch, the text "Your foe won the rematch!" will be displayed and the player listed cannot be rematched. The hero displayed to the left of the character is the hero on the first slot of the defense team when they are rematched, not that accounts first hero.

Structures can be placed on maps. Fortresses and resources are permanent structures, and cannot be removed. Event Items are available to build for only a limited time.

Structures raiding parties use for support. A maximum of 6 offensive stuctures (including the Fort which is fixed) can be brought when raiding.

These structures are useful when defending a keep. They support the team defending the keep. A maximum of 6 defensive stuctures (including the Fort which is fixed) can be placed at the same time.

Traps are triggered when foes end movement on one. However, when triggered, traps affect allies as well. A maximum of 4 traps can be placed at the same time.

Resources store Aether and replenish it. These structures may grant Aether to the raiding party when destroyed, but only if they win. Both structures must be placed on the map.

Decorative structures with no combat function. Can not be destroyed by a Catapult. A maximum of 4 Ornaments/R&R Structures can be placed at the same time.

Resort structures. Can also be used as decor. Can not be destroyed by a Catapult. A maximum of 4 Ornaments/R&R Structures can be placed at the same time.

Playing at least once a day during a season also provides rewards. Unlike Arena, multiple daily rewards can not be collected in a single day.

Reaching Tier 11 or higher will allow a 5th ally to be added to a raiding party and a defensive team.

Reaching Tier 19 or higher will allow a 6th ally to be added to a defensive team.

Both of these upgrades cost 300 Aether Stones.

Starting with the season that began on 2019-07-09T07:00:00Z, defense rewards have been added. Defense rewards are granted based on sum of the three failed defenses with the highest Lift lost, stated as "Defense Lift". Note that "Defense Lift" is different from the total amount of Lift Loss per season, which can be up to -640.