Aether Resort is a non-combat game mode introduced in Version 3.4.0 where the Heroes belonging to the player or their friends can interact with each other. It can be accessed from the Aether Keep menu.

Similar to Aether Raids, Aether Resort takes place on a map that the player can customize by choosing terrain types and placing structures.

Heroes will wander about the Aether Resort map, and can interact with other Heroes through a variety of short animations. The heroes that appear will initially be a random group of three selected from the player's barracks, but the player may select up to eleven specific heroes from their barracks or friends list to guarantee that they appear. Heroes with a maxed Ally Support level will have blushing animations when interacting with their partner. 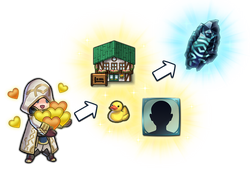 This mode uses its own form of currency, called

R&R Affinity, to build structures, purchase amenities, and unlock additional slots for Heroes and structures. For every 10 R&R Affinity spent, the player will receive 1

550 R&R Affinity will be received upon entering Aether Resort for the first time.

An Aether Resort Pass can be purchased for 3

Orbs to double the daily intake of R&R Affinity for 7 daily visits.

R&R Affinity can be used to purchase Hero slots past the initial 3 as follows:

The placement limit for structures can also be increased past the initial 14, as follows:

R&R Structures are special structures that allow viewing animations called events in Aether Resort. Events within a structure can be viewed either by tapping them, or dragging a Hero onto them. Tapping will simply select the Heroes from the first few slots until it reaches its max capacity for the event (for example, the Armory will simply select the first 3 Heroes in the Resort's slots), whereas dragging a Hero guarantees that they will appear in the resulting event.

Unlike Aether Raids, duplicates of the same structure may be placed in Aether Resort.

R&R Amenities are small items that can change the appearance of R&R Structure events. An amenity may only be purchased if its corresponding structure has already been built.

The terrain of the Aether Resort can be changed.