Pair up with a friend's Hero and take on special battles where foes continuously appear. Achieve a high score to get rewards like Dragonflowers!

To celebrate the addition of this new mode, quests where you can get First Summon Tickets for use in a Hero Fest are available.

Tap More for additional information about this mode.

More >
■ What is Allegiance Battles?

Defeat the entire enemy force, including reinforcements, within ten turns to win and receive your score. Don't forget to use bonuses to maximize your score!

You're free to battle as many times as you like. Veteran players can even face the Advanced difficulty right away. With help from your friend's Hero, defeat one foe after another and aim for a high score!

If you have a Legendary Hero with the Pair Up ability, then they will still deploy with their paired partner if they are placed in the first, second, or third slot from the left.

Form a pair with a friend's Hero! You can choose who to pair up with by tapping Allegiance Battles, then Challenge, then Set Used Proxy.

Note: Each friend's proxy Hero can only be deployed once per day.

You can choose one of your Heroes to dispatch as a proxy for your friends from the Set Sent Proxy screen.

Consider which Hero might be of great use to your friends! 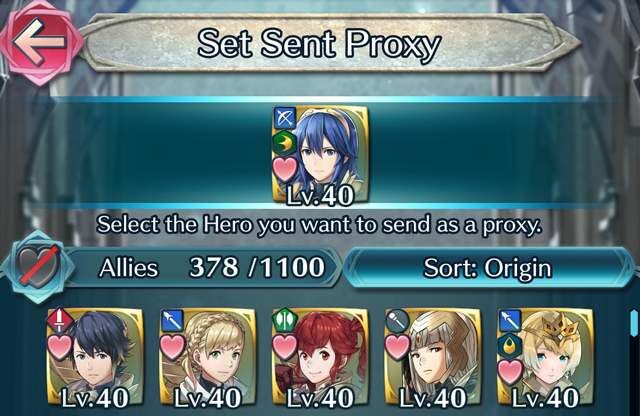 The score that you receive upon victory is calculated using the same rules as the Arena. Try taking on these battles with the strongest possible team to maximize your score!

There are also multiple bonuses that can help you reach a high score:

・Synergy Bonus
Each season, win one battle to increase your Synergy. A bonus based on your Synergy will be added to your score. Synergy is capped at 99.

・Quest Bonus
Complete Quests to defeat specific bosses each season to receive a bonus. The Quest Bonus is capped at 25 points.

Note: Quests completed by both you and your friends count toward the bonus.

・Friend Bonus
A bonus added to your score based on the Battle Scores of your three highest-ranking friends. Calculated by dividing your friends' Battle Scores by 100 (with a max value of 8 per friend, capped at a total of 24 points).

Note: The strength and score of enemies who appear in Allegiance Battles are based on the strength of the four Heroes on your team (the strength of your friend's proxy does not count).

At the end of a season, you will receive rewards based on your total score.

The type of Dragonflowers rewarded changes each season. You can see the current season's rewards by tapping Check Rewards.

"Wow! I really want to try pairing up with a Hero!"