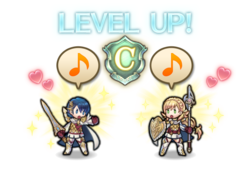 Ally Support is a feature introduced in Version 1.7.0 that allows Heroes to create bonds by forming partnerships with one another. It can be found under the Interact with Allies menu.

Partnered Heroes are marked with

during combat. If partners are within two spaces of each other they'll gain an advantage on the battlefield, and if they battle foes level 35 or higher, their bond will grow stronger.

The ally support rank will increase after a certain number of maps are completed, in which the paired up units partake in battle while being affected by the current support level. Both units can contribute to the support number in each map, so if both units partake in battle in each map, the number of maps required is halved compared to if only one of the units battle. This counter is reset with each new support level, so overshooting the limit does not count towards the following limit. To reach higher support ranks, an increasingly larger amount of maps need to be completed.

Maps = Completed maps in which the unit battled at least one foe of level 35 or higher, while being supported by its partner.

Separate map count columns shown for the number of required maps when a single unit contributes, and for when both units contribute in each map. The actual number of maps can be anywhere in between, depending on the contribution of both units in each map.

Each Hero can have only one partner at a time. It is possible to change a Hero's partner, but doing so will reset the Support Rank with their previous partner. Also multiple identical versions of a Hero cannot each have separate support pairings. Ally support only applies if both units are owned by the player.

A Hero is allowed to have both an Ally and a Summoner Support.