The Arena is a pseudo-PvP mode against another player's team controlled by the AI. 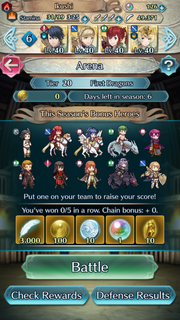 In order to fight a match, a player must go to battle and consume a Dueling Sword (Three given daily during daily reset), which will then send the player to a screen to select an opponent. Opponents are split into 3 difficulties: Beginner, Intermediate, and Advanced. The higher the difficulty, the more points received. Using at least one bonus hero on the team will increase points gained by 2x. Each casualty incurred in a match will lower the amount of points received. Losing or surrendering during a battle will end the win streak. Details are listed in the section below.

The defense team can be set by going to Allies > Edit Team. The team with a shield next to its name is the team that will be chosen as your Defense team. The leftmost character in this team will be the one other players see when selecting you as an opponent. The stronger the opponent, the higher the defense score. Using at least one bonus hero on the team will increase points gained by 2x. Details are listed in the section below.

Total ranking will be determined by both your final offensive and defensive score and is updated hourly. Total Ranking is displayed the crown shown on the top-left corner after selecting Check Rewards.

Bonus Heroes are displayed in the Arena screen and are heroes which increase the amount of points a player can receive from a match by 2x if placed in the team.

The Arena resets every season (weekly). Each Arena season starts on Tuesday at 7:00 AM UTC and ends on Monday 11:00 PM UTC. During the downtime in between each season, rankings will be calculated to determine the amount of rewards you will receive.

The offensive aspect of arena allows a player to use their team to battle against AI-controlled teams of other players.

Teams are chosen and matched against a player with the following considerations in place:

Upon using a Dueling Sword to enter the Arena, three enemy teams along with their possible amount of points rewarded will be presented to the player:

Additionally, a player can increase their offensive score rewarded by including one of that arena season's bonus heroes. Including a bonus hero on the Arena team will increase scores rewarded by 2x. It is possible to tap the unit on the bonus screen to see who it is.

However, there are penalties to the shown arena score directly related to the amount of units felled during the fight. The more units lost in battle, the less points gained from that battle. The score penalty for each loss is as follows:

Once a player wins 5 battles in a row or loses/surrenders a battle, the streak ends and the final score is added up. Surrendering when viewing which opponents to battle will use up the Dueling Sword but will not end the bonus streak. If this score is the highest the player has achieved during the season, then this score will become that player's new high score for the season.

In addition to fighting other players, the player also sets a defense team that other players will face. The defense team is the one with a shield next to its name in the team slots. All but one team is completely empty, the filled one will be used.

Additionally, a player can increase their defensive score rewarded by including one of that arena season's bonus heroes. Including a bonus hero on the Arena defense team will increase scores rewarded by 2x. It is possible to tap the unit on the bonus screen to see who it is.

To view your current Defense Score and other defense information, select Defense Results from the Arena screen. Here you can view your current defense score as well as a list of successful defenses (Note that this does not include failed defenses).

Currently, it is unknown how opponent defense score teams are calculated.

The main reward for fighting in the Arena are

Different rewards are provided based on performance in Win Streak, Offense score, Defense score, and Overall Ranking. The player's score can be viewed via the "Check Rewards" button on the Arena Duels home screen.

Consecutive victories provide rewards called Chain Rewards. These rewards can only be earned once per season.

The player gains feathers dependent on their Defense score.

Tier: The player gains feathers and orbs dependent on the tier they are in at the end of the season. See #Arena Tiers

Arena Bonus Heroes are Heroes specified each season which increase the amount of points a player can receive from a match by 2x.

The Arena Bonus Heroes selected in most seasons follow certain patterns. These patterns may be subject to change, but the currently observed patterns are as follows:

The Arena Crown placed on Feh rewarded to those who reach the Great Summoner rank.

All players participating in the Arena are placed into tiers. It is possible to move up tiers each Arena season depending on the player's Arena score. Maintaining a high tier rewards the player with orbs, feathers, and divine codes. Each arena season, the high scores of all players in each tier are compared to each other. After the season, each player can be moved up or down a number of tiers based on their current tier and which percentile of players they scored in.

If the player reaches Tier 21 (Great Summoner), an Arena Crown will be placed on Feh on the Home Screen. However, dropping from Tier 21 will cause Feh's crown to disappear.

The tiers, their rewards, and their criteria for switching tiers are described in the following table. Using Tier 15 as an example of how to read the table:

This article is a stub. You can help Fire Emblem Heroes Wiki by expanding it.

In Version 2.1.0, a new set of 10 Arena maps were added. The following season (Arena season 51), the arena map rotation schedule was then changed to accommodate these new maps. These maps were removed since Coliseum season 197.

In Version 4.8.0, another new set of 20 Arena maps were added. These maps were introduced in batches of 5 from Coliseum season 185 to season 188. The current 8-week rotation schedule launched on the following season.