A Game Mode which fuses Arena and Squad Assault. 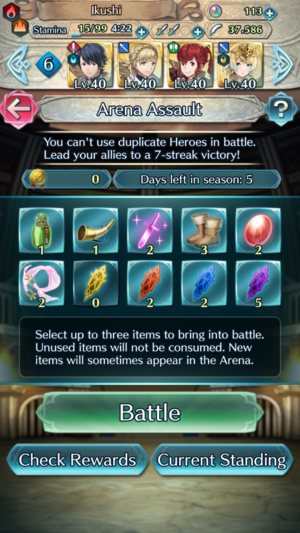 Arena Assault is a battle arena for advanced players. The goal is to use multiple teams to clear many maps in a row. As opposed to the regular Arena, no Dueling Swords are required to play.

Rewards are given based on rank at the end of each season with each season being one week long.

The score you earn is determined from the very first team you use, and unlike the classic Arena, there are no Bonus Allies.

After clearing one map, you'll immediately continue to the next map. Heroes who participate in battle cannot be used again in the streak. It is possible to use fewer than four Heroes per map, however you are not allowed to use duplicates of a Hero, meaning if you have already used Olivia: Blushing Beauty in the first map, you cannot use that Hero again in the following maps. Upon clearing a set of maps or losing, all Heroes will be released. This means that all your Heroes will be free to battle once again.

Special items can be earned by defeating teams that include enemies of level 35 or higher. The number of items awarded is based on the number on consecutive wins achieved.

The maximum number of items that can be stored is 99 for each type. You can bring up to three of the following special items into Arena Assault to use during battle.

The scoring system is similar to Arena. Defeating higher difficulty teams increases score, as well as consecutive wins. Casualties reduces score and losing to a team ends the run. The few differences in how Arena Assault is scored differently are:

Sacred Coins and Hero Feathers are awarded based on the player rank at the end of each season.