This page aims to cover the basics of the game and is meant to provide brief detail about the features of the game. If you would like further detail regarding a topic mentioned here, be sure to check out its Main article linked at the top of each section.

This article is organized based on the menu screens in-game (Home, Battle, Allies, etc.). If there is a specific section you want to get to, find out which menu screen it belongs to and then the section you want. For example, to read up on Sending Home units, that would be under Allies > Send Home.

For new players looking for a guide to getting started, check out the Beginners Guide.

For a specific question, try checking the Frequently Asked Questions page as well.

Fire Emblem Heroes is a tactical turn-based role-playing game where players control a team of four units to fight against enemy units on various maps turn by turn. Subsequent updates have released other modes of play featuring brigades of up to twenty units

Maps contain terrain such as forests, mountains, walls, trenches, and defensive tiles. A player's team of heroes and the enemy units start in predetermined positions. Beginning with the player, each side takes turns moving, attacking, healing, or supporting. Victory conditions are varied - route the enemy, defend for x number of turns, or capture camps and fortresses. 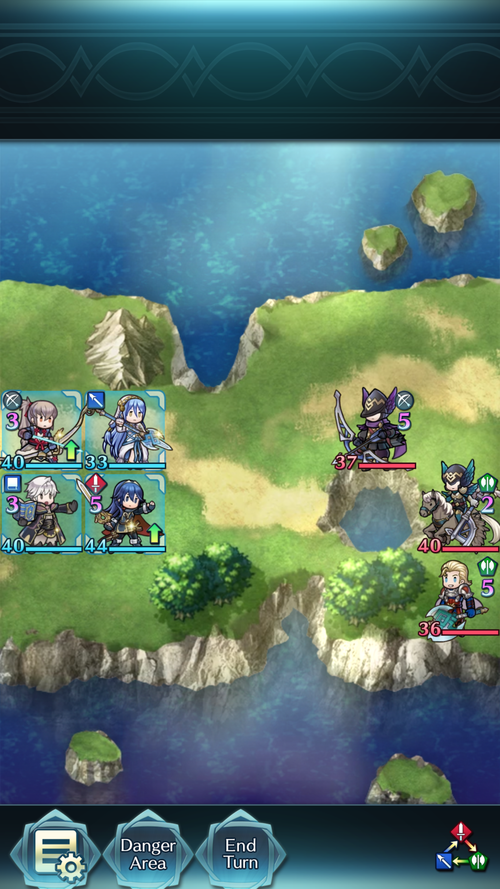 In Fire Emblem Heroes, combat is initiated when a unit attacks an opposing unit. There are several factors to take into account when initiating an attack including:

All of these along with a unit's stats and skills are used to determine the results of an attack.

Each unit has five stats listed and described as follows:

Stamina (PvE energy) is the energy used for playing battles outside of Arena. There is a max of 99 stamina and one stamina is recovered every five minutes (An empty stamina bar fully recovers in eight hours and fifteen minutes). This can also be fully recovered using a

Stamina Potion or an

Dueling Swords (PvP energy) are the energy used for playing battles in Arena. There is a maximum of three Dueling Swords per day which refreshes at Daily Reset. This can be fully recovered using a

Orbs are the main currency in the game. Orbs are needed to summon Heroes. They can also be used refresh stamina, refresh dueling swords, and other actions when lacking the required items to do so (e.g. If a player does not have a stamina potion to refresh stamina, then an orb can be used instead). Orbs can be obtained from the daily rewards, on first completion of story maps, through events, or by buying them from the Shop with real money.

There is a reset daily at 7:00 AM UTC (12:00 a.m. PDT or 3:00 a.m. EDT in the United States) which will refresh several in-game items as well as update maps and rewards. This is also the standard start time for Arena and announced events. The current list of items/maps refreshed and updated daily are as follows:

Other things that will be updated at the daily reset time, but not daily: 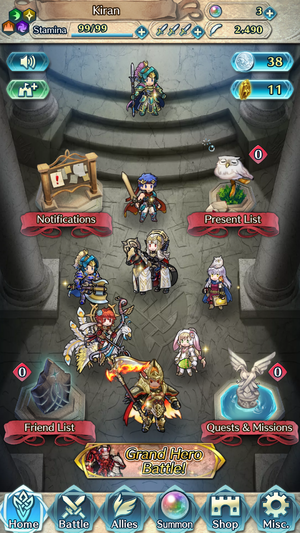 A player's home/castle is one of the menus available to him/her in-game. There are several actions and features a player can access on this page which include: 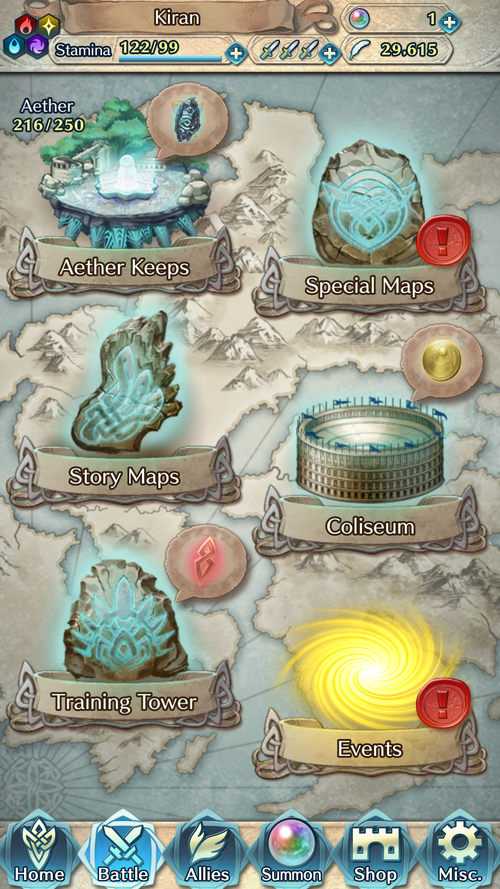 This is where a player can select and battle through various maps.

Battling will give units Experience (EXP) and Skill Points (SP) which will be explained later. However, units will not gain EXP and SP if they are at least five levels above an enemy unit.

Here players will learn about the Kingdom of Askr and work through three difficulties. Normal, Hard and Lunatic. Each first completion of a map will reward an Orb.

Aether Raids is a PVP game mode in Fire Emblem Heroes where a player can raid other players' Aether Keeps and their defensive teams controlled by the AI, score points to get ranked, and receive rewards based on final rank. Each day the stamina used for Aether Raids, called Aether, is restored by the

Arena is a PVP game mode in Fire Emblem Heroes where a player can battle against other players' teams controlled by the AI, score points to get ranked, and receive rewards based on final rank. Each day three Dueling Swords are given which are needed in order to battle others. To obtain more Dueling Swords, either a

Dueling Crest or an

Orb will need to be used.

The Training Tower is a set of eleven randomized map levels called Strata (Stratum, singular) where players can train units for EXP and earn rewards for completing the maps.

Special Maps are specific maps on rotation or from announced events which contain rewards upon first completion. This may include Heroes, Orbs, and other rewards.

These maps may have special conditions for victory such as "All allies must survive." and still cost stamina like normal maps. Pay attention to the recommended level requirement and make sure your team is prepared. 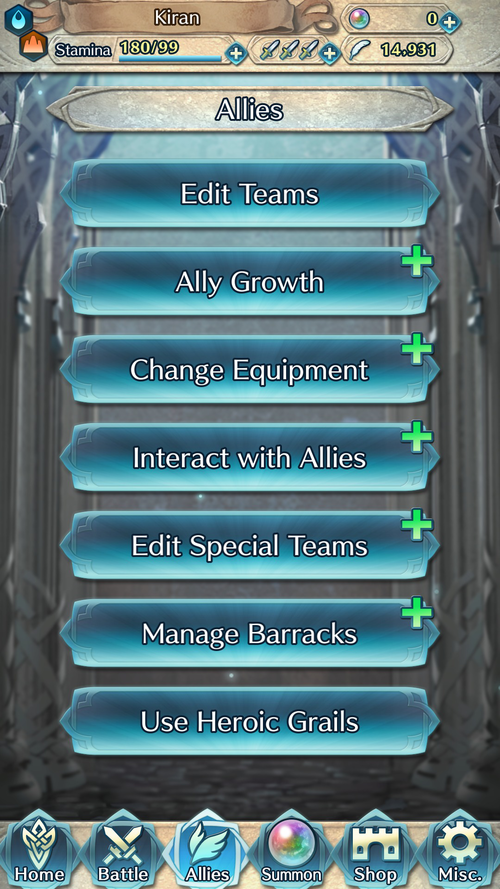 This menu option is where you can edit your team to bring into battle.

A maximum of fifteen teams can be created and can be switched to by swiping the teams left and right. It is possible to name each of your teams.

The defensive team used for arena defenses can also be set here.

If a team slot is empty, a Hero can be added by just tapping him/her from the list. To replace a Hero, tap his/her portrait to replace on the team and then select the Hero replacing him/her.

Heroes can be sorted in a variety of ways, which can be done by tapping "Sorting" and select one of the various sorting labels.

To learn more specifically about various Heroes, view the List of Heroes.

It is possible to level up units without taking them into battle using shards and crystals. This will not adversely affect the unit's stats in any way.

Shards are used to level a unit to 20 while crystals are used beginning at Level 21 to the maximum Level of 40. Shards and crystals have different colors, and the color used will depend on the color of the unit to be leveled. There is also a universal shard/crystal (gold-colored) which can be used for any color units.

This menu option is where units can learn new skills. To learn skills, a unit needs to have enough Skill Points (SP) in order to learn a skill. SP can be obtained through battle by leveling up, and successfully defeating enemy units.

Skill inheritance allows units to learn skills from other units not learned by default. For example,

However, not all units can learn every skill. There are three types of restrictions:

Unlocking Potential is upgrading a unit's star rarity such as 3

In order to unlock the potential of a unit, the following is needed:

Unit duplicates can be merged.

There are a few things that can happen when merging depending on the Star Rarity of the units used:

The remaining enhanced unit will receive the bonuses listed above, but any levels or SP from the source ally will be lost forever.

Favorited units cannot be merged into other heroes. A unit is favorited if there is a heart icon on his/her icon.

To un-favorite a unit, press and hold his/her icon to get into the character's status page. Tap the heart to unfavorite him/her.

Blessings can be given to units and when used with in a team with Legendary Heroes and/or Mythic Heroes and during an appropriate season, gain stats bonuses.

Typically, a unit will have multiple skills that can be equipped in a certain slot. For example, some units may have two different Special skills which they can equip, but a unit can only choose one to take into battle.

This menu option is where different skills can be equipped and swapped between on a units.

Allies can be equipped with Sacred Seals shown in skill slot S, and are effectively transferable Passives. Each hero can only equip one seal. Duplicate seals that share the same name will automatically be exchanged for 300 Hero Feathers.

Use Badges and Sacred Coins to create and enhance Sacred Seals.

Heroes can be dressed up by equipping them with Accessories that have been obtained. Each accessory can be equipped to on one hero at a time. Duplicate Accessories that share the same name will automatically be exchanged for 300 Hero Feathers.

Using Ally Support, two units can be paired together to grant each other passive stat boosts when near each other in the field.

The support level grows as the units fight together, and applies equally to all copies of the units, but do not stack when several copies are fighting simultaneously.

Ally Support bonds can be changed at any time, at the cost of the support level going back down to zero.

Using Summoner Support, a single unit can be selected to bond with you (the Summoner), granting him/her a passive stat increase.

The support level grows as the unit fights, and only applies to the single copy chosen for the bond.

Summoner Support bonds can be changed at any time, at the cost of the support level going back down to zero.

A Brigade is a team used in Rival Domains and Grand Conquests, which consists of 20 unique heroes.

Send Home is essentially the way to remove units you do not want anymore. Sending home units will give a set amount of feathers depending on the star rarity a unit is at. 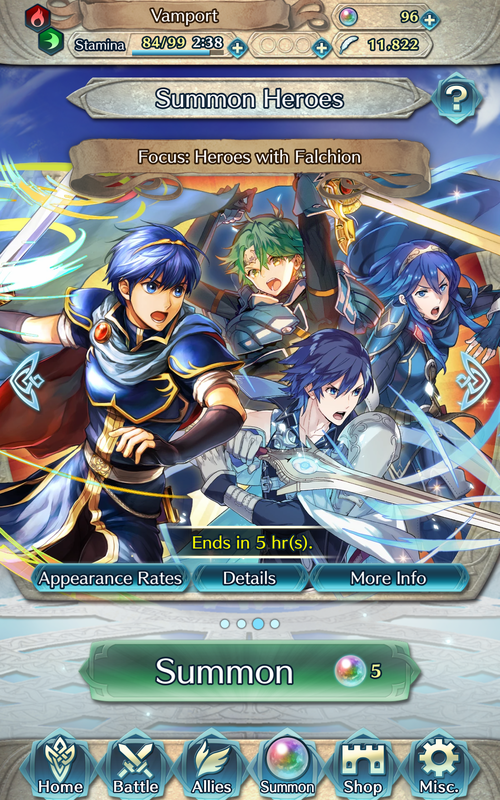 In this menu option, you can use orbs to summon more Heroes to fight with from summoning focuss. 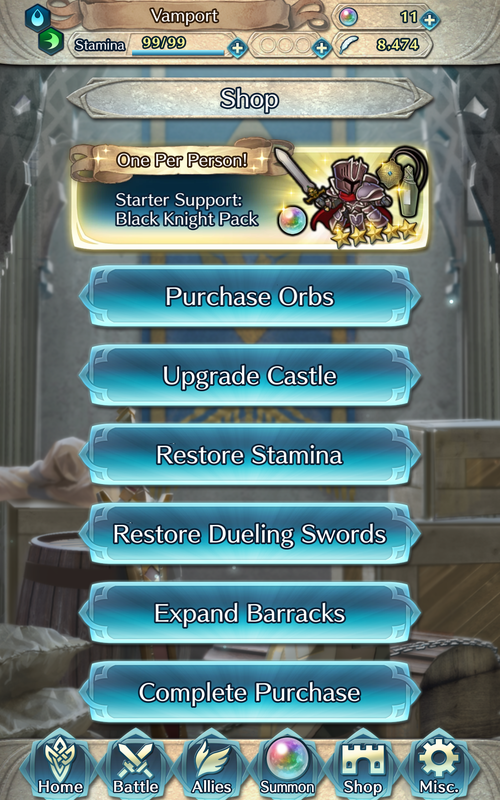 In the Shop, you can:

This is where you can change the game's settings to your personal liking. Here are the following things which can be changed:

In this screen menu, the following can be accessed:

Although not part of any other specific menu, this page is useful for viewing the stats and skills units have as well as being able to favorite a unit from here. This page can be accessed by pressing and holding a unit's icon. A short description and backstory of the unit can also be viewed by tapping on his/her name or title.

In battle, this page can be viewed by tapping a unit on the map, looking at his/her status across the top, and pressing the + button on top off his/her portrait.