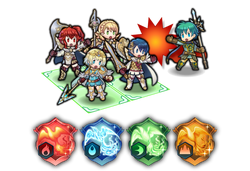 "Those who are blessed, do battle!"

Blessed Gardens is a game mode designed for units who use the Confer Blessing system. Clearing these mode will earn

Divine Dew and all four kinds of blessings.

The Blessed Gardens launched with four maps for each garden. New maps were added every Sunday at 7:00 AM UTC until the map that was added on 2018-08-19T07:00:00Z, after which Blessed Grounds maps were added in their place. All of the gardens are based on past Paralogue Maps.