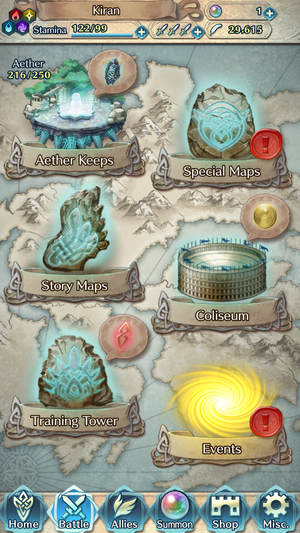 In the Battle Screen, the different kind of game modes in Fire Emblem Heroes can be found for the players to enjoy. This is also known as the world map.[1]

Additional maps in which

Orbs and Heroes can be earned.

Battle the Emblian Empire to bring peace to the World of Zenith!

Travel to other worlds and meet Heroes you won't find anywhere else!

Tactics Drills is a game mode designed to test the player's strategy. Each battle has situations that use a fixed set of Heroes that must be used to overcome challenges with a set number of turns.

Several Story and Paralogue maps in a row which reward

Special weekly maps designed for units who use the Confer Blessing system, which reward

Allegiance Battles is a game mode that uses the

Pair Up ability. if you have a Legendary Hero with the Pair Up ability, you can deploy them with their paired partner. Even if you do not have any Heroes with the ability, the Hero in the rightmost slot on your team can be paired up with a friend's Proxy Hero. Your goal is to defeat the entire enemy force, including reinforcements, within 10 turns to win and receive a high score. At the end of a season, you will receive rewards including

The Arena is a pseudo-PvP mode against another player's team controlled by the AI, which rewards

The Arena Assault is an arena-like mode with Squad Assault rules, which reward

The Training Tower is a great place to train Heroes and farm Badges.

A monthly event in which the player selects 1 of 8 Heroes to support. They join that Hero's army to battle another Hero's army in a team vs. team format.

The Tempest Trials is a series of high-difficulty maps. The player receives rewards for reaching certain high scores.

Grand Conquests is an event in which three armies fight over a territory, over the course of three battles, each lasting two days. Each player is randomly assigned to an army led by either

Sharena: Princess of Askr, or

Anna: Commander[2] at the beginning of each battle. By contributing to their army's victory players earn rewards for Areas Controlled and GC Tier, as well as by completing quests.

Forging Bonds is an event where players can view special conversions with Heroes from New Heroes Summoning Focuses, and earn rewards such as accessories, Badges,

Universal Crystals, etc. After every battle, a random amount of friendship points will be received. The type of friendship received cannot be chosen and is random, but always goes to an event character whose points are not maxed out at 3500.

Røkkr Sieges is a where players face off against Røkkr, shadowy enemies with that have taken on the form of Heroes.

Havoc Axes are used in this gamemode as mode-specific stamina. Røkkr Sieges is compatible with Pair Up. Røkkr enemies have HP hp values of over 100,000. To assist in reducing its HP, damage boosts in the form of multipliers are present, and can be increased by defeating other foes. However, Røkkr can only be defeated by allied armies, which appear at the end of the battle to deal significant damage. Battles end after 7 turns or after a certain amount of damage has been dealt.