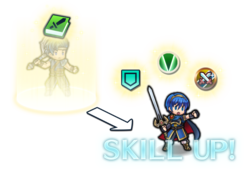 Combat Manuals is a feature introduced in Version 2.9.0 where the player can exchange Heroes for items called Combat Manuals, to conserve Barracks space. It can be found under the Manage Barracks menu.

The player can use the Create Combat Manual feature to convert any Hero into a Combat Manual item, which is then stored in the manual inventory. Manuals bear the name and rarity of the Hero sacrificed, but do not retain any of the merges, inherited skills, Summoner Support, or Blessings that the sacrificed Hero had. Up to 9,999 of each type of manual may be stored in the manual inventory.

Once a Hero is converted into a manual, it can no longer be used in combat. However, Combat Manuals can be used in place of a Hero to transfer skills through Skill Inheritance, add merges to Heroes through Merge Allies, or exchange for Hero Feathers through Exchange Manuals. Manuals can also have their rarity upgraded through Unlock Potential.

In essence, Combat Manuals allow the player to store away unwanted Heroes that they do not plan to use in combat, or that they plan to use to enhance other Heroes, without having those Heroes occupy space in the Barracks.

In Skill Inheritance, a Combat Manual can be used instead of sacrificing a Hero. The skills available from a particular manual are the same as those available from a Hero matching the manual's name and rarity. For example, a 4

Barst: The Hatchet manual will have the same skills available as a 4

Barst: The Hatchet. Like Heroes, up to four skills may be inherited from a single manual, and a manual will disappear after one or more skills have been transferred from it.

In Merge Allies, a Combat Manual can be sacrificed in place of a Hero to add merges, add Skill Points, and decrease Unlock Potential Feather cost. Manuals will act identically to a Hero matching the manual's name and rarity, with no learned skills, merges, Summoner Support, or Blessings.

Manuals can only act as a source for merging, not as the recipient. As such, manuals cannot gain merges from Heroes or from other manuals.

In Unlock Potential, manuals can have their rarity increased for the same Feather and Badge costs as unlocking the potential of a normal Hero. Increasing a manual's rarity expands its available skills in the same way as upgrading the corresponding Hero would. For example, upgrading a 3

expands the manual so that skills from a 4

Hinata: Wild Samurai are available. Upgraded manuals will also behave as a Hero of their upgraded rarity when used for merging.

When upgrading manuals, several of the same type and rarity can be selected to be upgraded in bulk. The costs of doing so are the same as upgrading the manuals one at a time.

In Exchange Manuals, manuals can be exchanged for Feathers, matching the amount if the original Hero was sent home. Similar to Heroes sent home, exchanged manuals will be permanently lost.

This article is a stub. You can help Fire Emblem Heroes Wiki by expanding it.

Divine Codes can be compiled into Combat Manuals.