As part of the Unified Community Platform project, this wiki and 38 others will be migrated to the new platform in the next few weeks. Minimal changes are expected as part of this migration. Read more here. 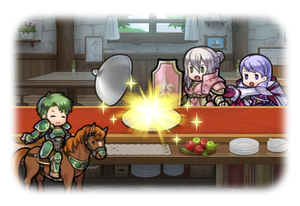 Here, Heroes can use ingredients harvested from the

A chef and 4 customers are randomly chosen from the first 5 unit slots in the player's Aether Resort. If less than 5 slots are filled, then units from the player's barracks are selected at random to fill the remaining slots. If a particular unit is dragged onto the Dining Hall, then they will be chosen as the chef.

The Summoner has a small chance to appear as either the chef or one of the customers.

Ingredients harvested from the Field are used to prepare dishes. Each dish may consist of 1 to 4 ingredients, plus an optional "secret ingredient". Initially, only two ingredient slots and the secret ingredient slot are available, but slots 3 and 4 are unlocked after making 5 and 15 unique recipes (called "nice dishes"), respectively.

The total amount of ingredients required across all recipes is:

Rewards are given based on the amount of total stars earned for cooking dishes. The reward cycle lasts 30 days, after which it resets.