In the Allies Menu you can manage your Heroes and their Teams, learn and equip new skills, and make them stronger in the Advanced Growth menu. 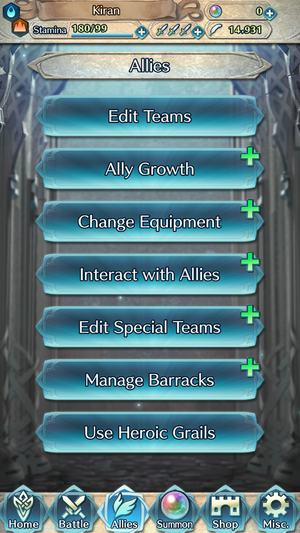 It is possible to create up to 15 teams which can be used for battle. Teams can consist of any combination of four or less Heroes, for example:

Teams can be named (up to 12 characters), and it is possible to set one defensive team for the Arena, which is marked by a shield icon

.
The leftmost Hero on the very first team is your leader, and represents you while visiting your friends' Castles, and on the various leaderboards. 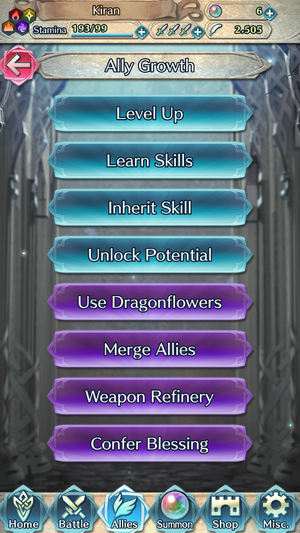 transparent-colored Shards and Crystals are used for red, blue, green and colorless Heroes respectively, while

universal-colored shards and crystals can be used to replace any of them.

Skill Points (SP) can be used to learn new skills. SP can be earned by defeating enemies and leveling up Heroes, while new skills can be Unlocked or Inherited.

Inherit Skill is a feature that allows a Hero to learn skills from another Hero.

Dragonflowers can be obtained from Heroic Ordeals or Aether Raids. Dragonflowers grant additional stats to a unit that persist across all game modes.There are four types of Dragonflowers, one for each of the four movement types:

Flying. To enhance a unit, Dragonflowers matching its movement type must be used.

Merge Allies is a feature that allows you to merge duplicates of the same Hero to gain benefits.

The Weapon Refinery is a feature where the player can upgrade and evolve Weapons.

Confer Blessing is a feature where the player can use a Blessing to confer a bonus to any non-legendary hero. 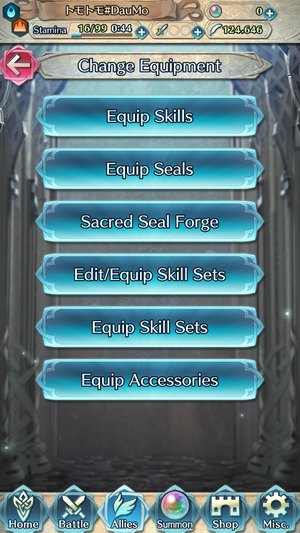 Here you can change the skills your Heroes have equipped for battle. There are two type of skills:

Allies can be equipped with Sacred Seals shown in skill slot S, and are effectively transferable Passives. Each hero can only equip one seal. Duplicate seals that share the same name will automatically be exchanged for 300

The Sacred Seal Forge is a feature where the player can create and enhance Sacred Seals. Players must first clear Chapter 13: Diabolical Bloodline and Intermission: A Power Awakens from Book I, in order for this option to appear.

Heroes can be dressed up by equipping them with Accessories that have been obtained. Each accessory can be equipped to on one hero at a time. Duplicate accessories that share the same name will automatically be exchanged for 300

Hero Feathers. Upon entering the equip accessories menu for the first time the player is rewarded with a

Feh Doll and an 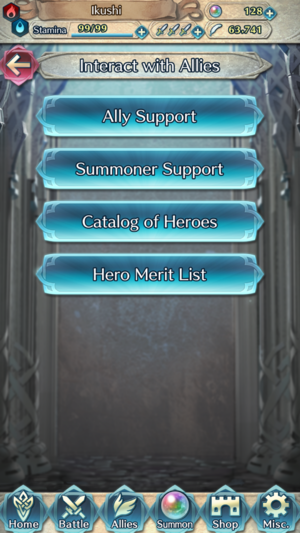 Pair Up is a feature that allows certain Legendary Heroes to enter battle with another unit, which boost both heroes' stats.

Ally Support is a feature that allows Heroes to create bonds by forming partnerships with one another, which boost stats during combat.

Summoner Support is a feature that allows a Hero to form a bond with the Summoner, which boosts the chosen Hero's stats permanently. 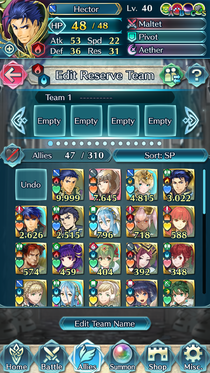 A brigade with 20 unique heroes 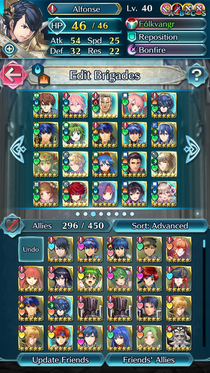 A Brigade is a team used in Rival Domains, Relay Defense, and Grand Conquests. Brigades may consist of heroes owned by the player, as well as the leader heroes of the player's friends. Each brigade may contain up to 20 unique heroes, but at most one hero may learn

Dance. Players can edit their Brigades in the Allies Menu or before entering a Rival Domains, Relay Defense, or Grand Conquests map. 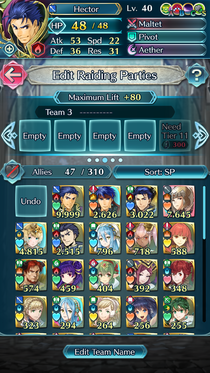 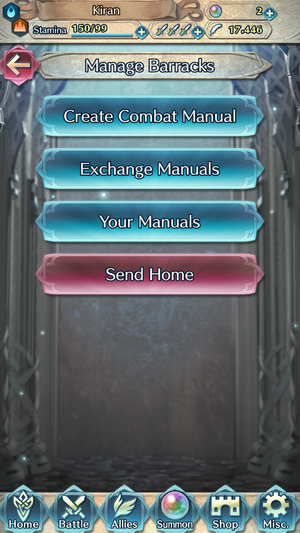 Select heroes and turn them into Combat Manual items. Manual items can be used for merging or skill inheriting, and have their rarity increased for the same Feather and Badge costs as unlocking the potential of a normal Hero.

Manuals can be exchanged for

Hero Feathers, matching the amount if the original Hero was sent home. Similar to Heroes sent home, exchanged manuals will be permanently lost.

Hero Feathers in exchange for Heroes you send back to their worlds, but you will lose them permanently.

In the Use Heroic Grails menu, 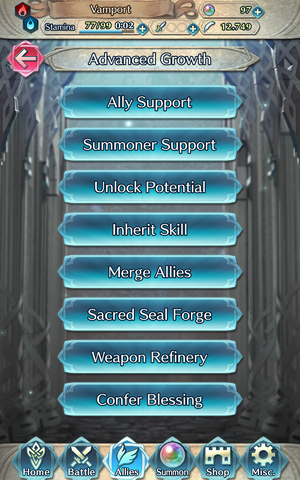