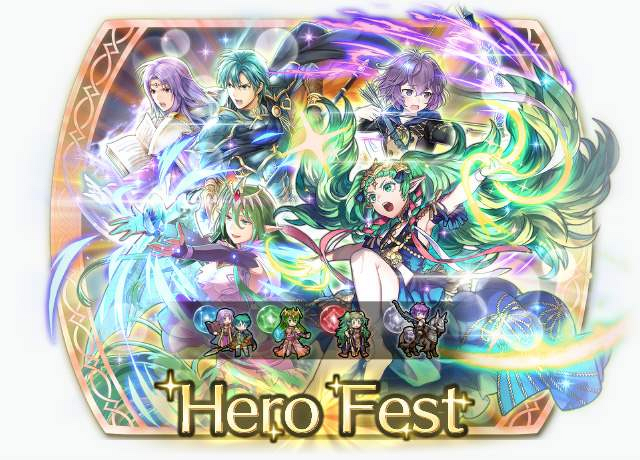 Four Heroes combining popularity and power are here for Feh's Summer Celebration Hero Fest! During the active period, the initial appearance rate for the 5★ focus Heroes will be set to 5%!


The next time this Mythic Hero will be available is as follows:

• Heroes of the summoning focus might be summoned through the 5★ Focus category.
• The initial appearance rates for 5★ and 5★ Focus are 3% and 5%, respectively.
• If you summon five times in a row without getting a 5★ Hero, the appearance rates for both 5★ and 5★ Focus will increase in proportion to their initial appearance rates of 3% and 5%, respectively.
• Heroes with different illustrations and epithets are treated as different Heroes even if they are the same character. As such, you cannot use them with Merge Allies.
• To view summoning details, you can tap on List of Heroes at the bottom of the related notification message or tap on Appearance Rates in the Summon menu. 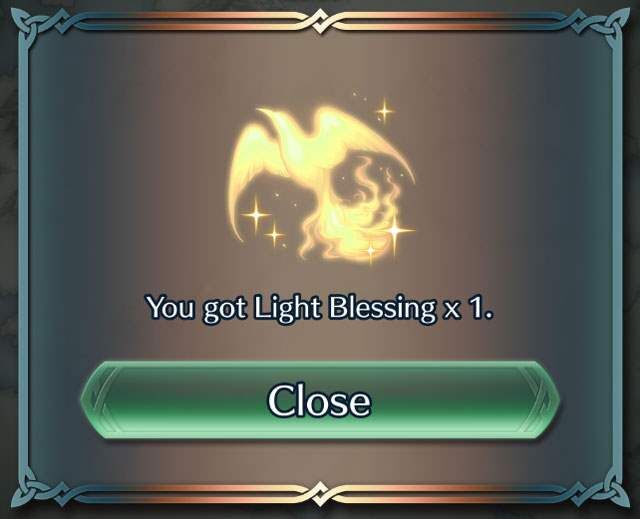 Effect during corresponding season:
1. If a Light- or Astra-type Mythic Hero and a Hero blessed with Light or Astra are deployed in Aether Raids, then the Lift acquired for successful attacks will be boosted.

2. If a Light- or Astra-type Mythic Hero who is merged one or more times is deployed in Aether Raids, then the Lift acquired for successful attacks will be boosted.

Effect during corresponding season:
3. If a Dark- or Anima-type Mythic Hero and a Hero blessed with Dark or Anima are deployed on defense in Aether Raids, then the Lift lost for unsuccessful defenses will be reduced.

4. If a Dark- or Anima-type Mythic Hero who is merged one or more times is deployed on defense in Aether Raids, then the Lift lost for unsuccessful defenses will be reduced.

Additionally, since Legendary Heroes whose Legendary Effect matches the season effect can receive a Mythic Effect in the same way as Heroes who have been blessed with a Light, Dark, Astra, or Anima Blessing, they are counted as Blessed Heroes and recieve benefits 1 and 3 above when deployed in Aether Raids.

Each season will feature two of the four elements: Light and Dark or Astra and Anima.

The current season is displayed on the upper-left corner of the screen. It can also be checked on the various menus used to edit your teams. 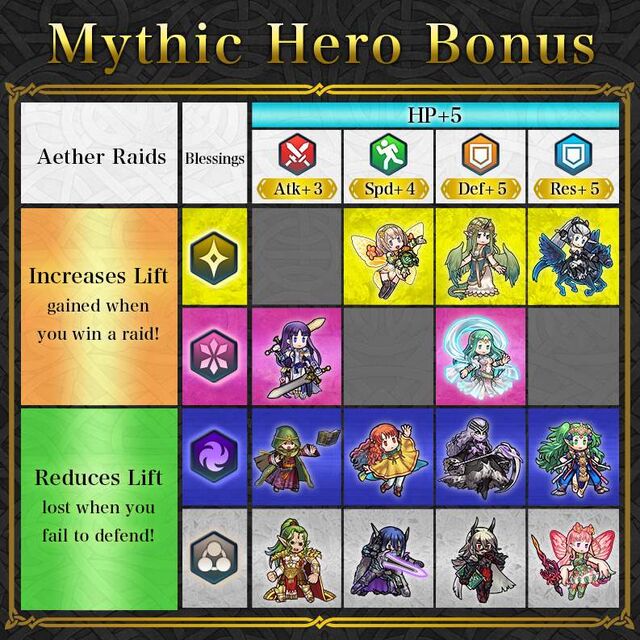 Mysterious girl that sits upon a throne within
dreams. Full of emotion, her attitude changes
by the moment. Appears in Fire Emblem: Three
Houses.

Grants allies this Mythic Effect during Dark
season, if the Dark blessing has been conferred
and if this unit enters battle in Aether Raids with
them: Dark-blessed allies decrease the
Aetheric Lift lost for defense failures during
Dark season. (This decrease is limited to the
number of Mythic Heroes (Max: 2) × the number
of Heroes with the blessing conferred × 5.)

During Dark season, this Mythic Hero will
decrease Aetheric Lift loss for defense
failures depending on number of merges. (This
decrease is limited to the number of times the
units have been merged × 1 (Max: 20).)

Sublime Surge
Mt: 16 Range: 1
Neutralizes "effective against dragons" bonuses.
Unit can counterattack regardless of foe's range.
If foe's Range = 2, calculates damage using the
lower of foe's Def or Res.
This skill can only be equipped by its original unit.

Sirius
Cooldown: 2
Boosts damage by 30% of unit's Spd. Restores
HP = 30% of damage dealt.
This skill can only be equipped by its original unit.

"I have already lived my fate. I may appear to stand before you now, but is it truly so?"

The princes of Renais and Grado. As heirs to
allied kingdoms, they were raised with a strong
bond with one another. They appear in Fire
Emblem: The Sacred Stones.

Duo Skill:
Infantry and armored allies within 2 spaces of
unit (including unit) can move 1 extra space.
(That turn only. Does not stack.)
(Duo Skills can be used once per map by
tapping the Duo button. Duo Skills cannot
be used by units deployed using Pair Up.)

"So many Heroes around our age... They'll soon learn that Lyon and I are a force to be reckoned with!"

Persecution Bow
Mt: 14 Range: 2
Effective against flying foes. Grants Atk+3.
At start of combat, if【Penalty】is active on
unit or if unit's HP < 100%, grants Atk/Spd+5
during combat, and if unit initiates combat, unit can
make a follow-up attack before foe can
counterattack.

Lull Spd/Def 3
Inflicts Spd/Def-3 on foe and neutralizes foe's
bonuses to Spd/Def (from skills like Fortify,
Rally, etc.) during combat.
Cannot use:

"Do you happen to know any good spots one might be able to curl up in and hide? Wanna help me look?"

These Heroes won't let us down!