The Fire Emblem series will mark its 30th anniversary on April 20, 2020 in no small part thanks to the passion and support of amazing fans like you.

In the 30 years since the Fire Emblem: Shadow Dragon & the Blade of Light game was first released in Japan, the Fire Emblem series has grown to span multiple titles and has been played and loved by fans the world over.

In appreciation of your passion and support for the series, we're holding the following 30th Anniversary Celebration events!

We hope that you'll enjoy marking this momentous milestone with these celebratory events.

Tap More for additional information about these events.

In appreciation of your passion and support for the Fire Emblem series over the last 30 years, we're holding a series of 30th Anniversary Celebration events!

You can get up to 60 Dragonflowers of each color and up to 60 Heroic Grails just by logging in! These Log-In Bonuses can be obtained for up to 10 days during the above period.

Twelve Grand Heroes from twelve games in the Fire Emblem series are making their return to the battlefield. Each Grand Hero Battle Revival will be available for a span of two days, so this series of battles will take place over a period of 24 days in total.

There will also be quests from which you can earn these Grand Heroes as allies, even if you completed them previously!

Maps themed on 13 entries in the Fire Emblem series of games will be made available over a span of 13 days.

Since you can attempt each of these maps on both Normal and Hard difficulties, you can earn up to 26 Orbs if you manage to complete them all!

Note: Each daily reward map will be available for 4 days. 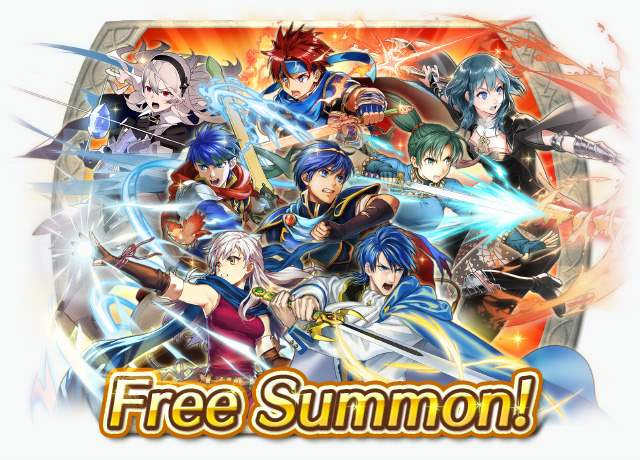 The lineup for this summoning event features 31 courageous Heroes who played leading roles in their respective games, and you can summon one of them without using any Orbs!

That's one Hero for each year of the Fire Emblem series up until now, and one more for the future of the series!

Notes:
• When you participate in the event, five Heroes will be randomly chosen from the available pool, and you may summon one of them. (Each Hero in the pool has an equal chance of being selected.)
• Not every summoning session will include Heroes of each color type, so the five summonable Heroes may not represent all the types present in the game.

For further information, tap here to see the summoning notification.

To celebrate the 30th anniversary, there will be some limited-time packs available for purchase. What's more, we're giving the Starter Support Pack a fresh coat of paint!

The Summer Sun Pack, Dragon Divinity Pack, and updated Starter Support Pack may each be purchased once per player.

Quests based on 13 entires in the Fire Emblem series will be making an appearance. Clear maps in which the featured Heroes appear to earn rewards!

Congratulations on 30 years of Fire Emblem fun! May many more be in store for us all!