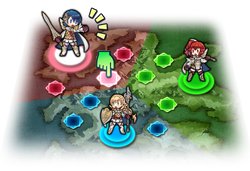 Grand Conquests is an event in which three armies fight over a territory, over the course of three battles, each lasting two days. Each player is randomly assigned to an army led by one of three Heroes at the beginning of each battle. By contributing to their army's victory players earn rewards for Areas Controlled and GC Tier, as well as by completing quests.

In Grand Conquests, three armies battle to conquer territory across a continent. When the battle ends, the armies will earn rewards, based on how many areas they control. Each Grand Conquests event has 3 battles, with each battle taking course over two days. Each battle include eleven rounds, which last four hours. After each battle, the area map will change and all participants are reshuffled into new outrealms and armies as well. Each army has 200 participants (per update announcement for version 2.4.0).

How to Participate[edit | edit source]

Select an area that is adjacent to an enemy to enter battle and earn points. Entering battle consumes Grand Conquests-specific stamina. Use the boost option to consume more stamina and multiply score! Stamina can be restored by redeeming

During each round, bonus points will be applied to the total points earned in an area, based on the number of allies who battle in the area during the round.

Helping out can be done once per round. Helping out boosts the number of allies battling in a randomly selected area by 1, which helps boost the cooperation bonus. It's also possible to randomly receive an item when helping out.

Armies can be knocked out mid-round when battle conditions are calculated. If the difference between first and second place armies exceeds the threshold, the winner gains the area immediately. If this happens, a knockout icon will appear and no battles can be fought in the area for the remainder of the round. The first-place team must have a difference of 200,000 points from the second-place team in an area to knock out an area. Before the seventh Grand Conquest event, only 100,000 points were necessary to knock out an area.

GC Tier will increase based on cumulative score in battle. The higher the GC Tier is, the more points will get added to areas adjacent to the player's selected area. Other rewards are also earned based on GC Tiers.

There are seven difficulties with different amounts of points and enemy levels.

Scoring in Grand Conquests is similar to Rival Domains as they use the same maps.

Foes defeated
The player accumulates points for each enemy defeated, capping at 20 enemies.

Fortress defense
Points are added depending on how well the player defends their fortress. The more HP at the end of the stage, the better.

Fortress offense
Points are added depending on how many times the player attacks the enemy fortress. The less HP at the end of the stage, the better.

Bonus
Unlike Rival Domains, there are no bonus points in Grand Conquests obtained upon defeating enemies using a given move type.

Total score
The score obtained in each map is added to the player's grand total score, which is used to determine rank-in-army awards. An amount of experience is also received by the player, which increases the player's Grand Conquest tier upon reaching certain thresholds. The experience is normally equal to the map score, but can never be greater than a fixed value that differs across difficulties

Both score and experience can be further multiplied by the amount of stamina used.

Areas can apply or receive effects to or from other areas. When effect is applied, the current map screen will update to reflect the change.

The GC Tier increases based on the cumulative experience earned over the course of all three battles. The higher the GC Tier is, the more points get added to areas adjacent to the selected area. Additional rewards are also earned after reaching each GC Tier.

Before the sixth Grand Conquest, points were earned only after the last round.