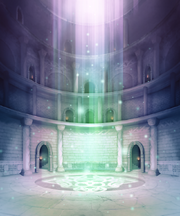 In this mode, players are provided with a pre-set team of Forma units, which can gain random skills as they are used in the mode. The mode's style of progression is similar to that of the main Fire Emblem games.

The pre-set team of Forma units must be used to play this mode, and they cannot be added to the player's barracks. Forma units will level up from combat in a similar manner to normal units, but any experience bonuses granted by events or castle upgrades do not apply.

This mode uses a special form of stamina. Each of the 20 stages, or chambers, of this mode costs 1 unit of this stamina to play. This stamina refills at a rate of 3 units per day, and can be instantly restored by using a

When playing a stage, the first Forma unit to kill an enemy will be eligible for Shaping after the battle. During Shaping, the player may choose one weapon, assist, passive skill, sacred seal, or a merge to add to the unit. The skills available in a particular Shaping session are randomly determined before the player is allowed to choose one.

The skills available include generic inheritable skills, sacred seals, and refined weapons, as well as any unique skills that the unit would normally have access to. (For example,

Celica: Caring Princess may be offered a refined

Alm: Imperial Ascent may be offered

Unlike normal units, Forma units are not able to swap between obtained skills at will; any new skill added to a slot already containing an old skill will overwrite the old skill. For example, choosing to receive

Death Blow 4 when the unit already has

Fury 4 in skill slot A will cause