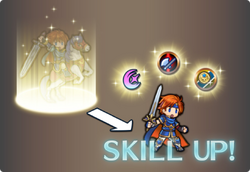 Inherit Skill is a feature introduced in Version 1.1.0 that allows a Hero to learn skills from another Hero. It can be found under the Ally Growth menu.

You can use Inherit Skill to learn up to four skills at once from a Hero. (three prior to Version 3.3.0)

There is no limit to how many skills a Hero can inherit overall. However, each sacrificed Hero can only provide up to four inheritable skills.

A Hero can inherit learned or unlearned skills from another Hero, but a Hero does not immediately learn a skill just by inheriting it. In order to learn the inherited skill, the Hero will need 1.5x the normal amount of SP required to learn that skill. An exception to this is if a Hero inherits a skill they cannot learn at their current rarity, but at a higher rarity; the SP cost will remain normal.

You will lose the Hero that donated the skills to the other Hero, so use Inherit Skill wisely.

a Combat Manual can be used instead of sacrificing a Hero. The skills available from a manual are the same as those available from the Hero that the manual was created from. For example, a 3

Bartre: Fearless Warrior manual will have the same skills available as a 3

Bartre: Fearless Warrior. No more than 4 skills may be inherited from a single manual, and the manual will disappear after one or more skills have been inherited from it.

Most skills are inheritable, barring a number of exceptions. There are three type of restrictions:

Additionally, Prerequisite skills must be inherited as well, and count towards the limit of 4. For example, in order your Heroes to inherit and learn

Vantage 3, they need to inherit

When merging allies, all inherited and base skills and their learned status will be passed on. For example:
Example A

This allows you to invest skills in a Hero even if they do not have a preferable stat variation because if you find the same unit with a better stat variation, you can safely merge them together and they will keep all their learned and unlearned skills. This was introduced in Version 1.2.0.

The Search Function was introduced in Version 1.7.0 and it allows you to easily search for Heroes with specific skills. Use the filter to set the skill you want to find, and the Heroes that can learn that will have a check mark on their profile. Heroes who could learn the skill if they were to use Unlock Potential to increase their rarity level are denoted by a gray mark.