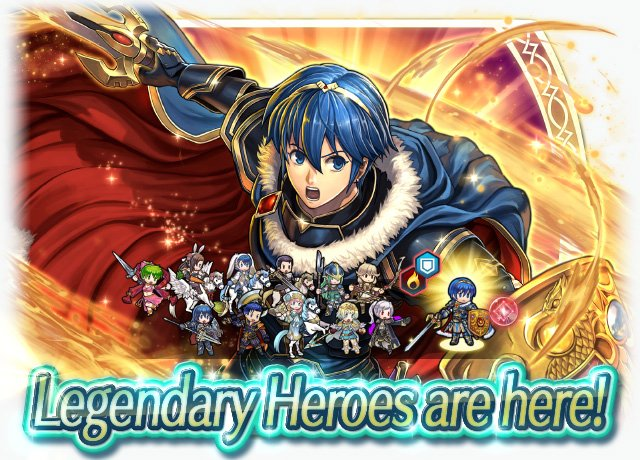 A Legendary Hero is here from the Fire Emblem: Mystery of the Emblem game! Now's your chance to summon Marth: Hero-King during the Legendary Hero summoning event!

For new summoning events, the first time you summon, you won't have to use an Orb! 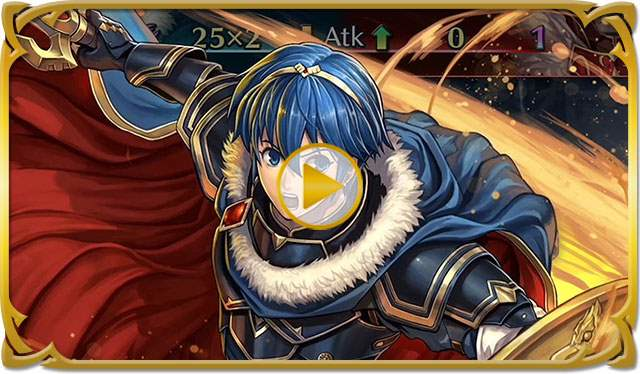 
• The next time these Legendary Heroes will be available is as follows:

• As of now, this is a limited-time opportunity to summon these Special Heroes. They may or may not appear again in a summoning event held in the future. Please note that they may appear as a different rarity or at a higher appearance rate.
• Heroes with different illustrations and epithets are treated as different Heroes even if they are the same character. As such, you cannot use them with Merge Allies.
• To see more summoning details, tap the Appearance Rates and Details buttons on the Summon menu. 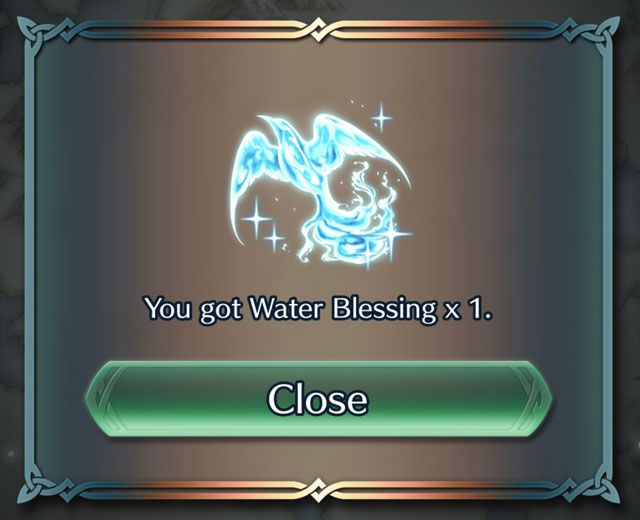 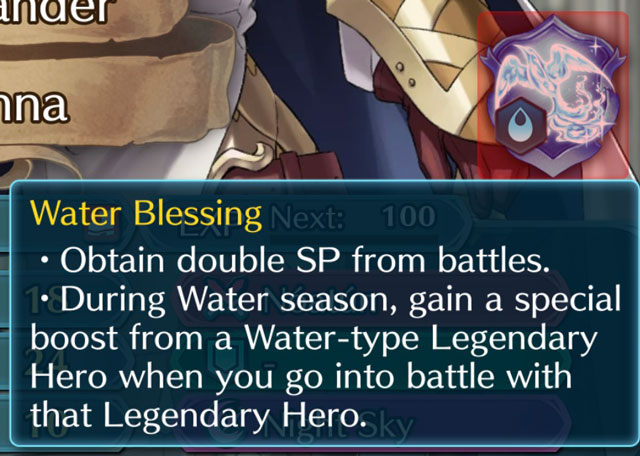 Each season will feature two of the four elements: Water, Wind, Earth, and Fire. Seasons will change at the same time as Arena seasons, on Tuesday at 7:00 a.m. every week. 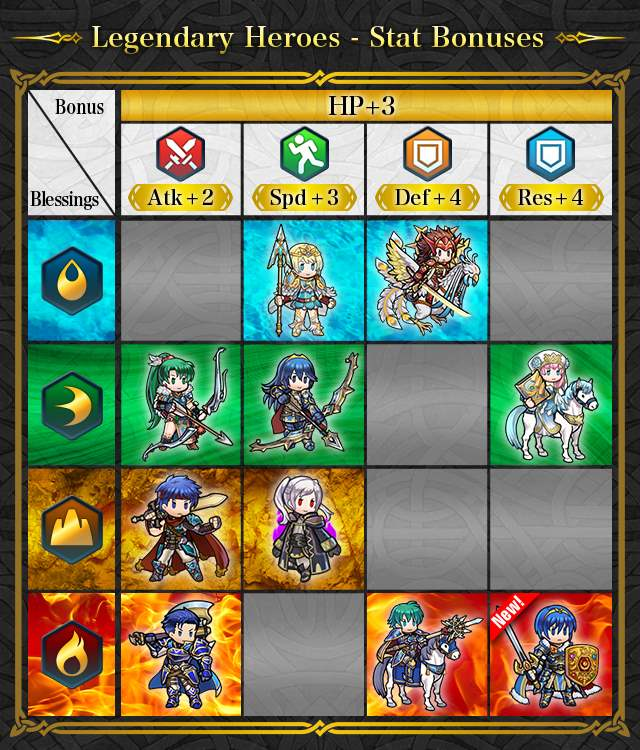 Prince of Altea. After the War of Shadows and


the War of Heroes, he becomes the first king
of the Archanean Alliance. Appears in Fire
Emblem: Mystery of the Emblem.

Exalted Falchion
Mt: 16 Range: 1
Effective against dragon foes. Grants Spd+3.
Grants bonus to Atk/Spd/Def/Res during
combat = current bonus on each of unit's stats.
Calculates each stat bonus independently.
This skill can only be equipped by its original unit.

Fire Emblem
Cooldown: 2
Boosts damage dealt by 30% of unit's Spd.
Grants Atk/Spd/Def/Res+4 to unit and all allies
for 1 turn after combat. (Bonus granted to
allies even if unit's HP reaches 0.)
This skill can only be equipped by its original unit.

Binding Shield
In combat against a dragon foe, unit makes a
guaranteed follow-up attack and foe cannot
counterattack or make a follow-up attack.
This skill can only be equipped by its original unit.

"The seven kingdoms of Archanea are uniting as one... And the people are saying I should be entrusted with it."

A dancer and descendant of the high priest


Bragi. She understands how the world works,
but she doesn't let it get her down. Appears in
Fire Emblem: Genealogy of the Holy War.

A formidable mage knight in Friege's


army and Olwen's older brother. He was
defeated by Prince Leif. Appears in
Fire Emblem: Thracia 776.

"I have seen others burn with passion that utterly consumes them... I do not believe I have this capacity. And I have come to see that as a weakness."

The gentle second princess of Nifl, the

Leiptr
Mt: 16 Range: 1
Unit can counterattack regardless of foe's range.
This skill can only be equipped by its original unit.

Ice Mirror
Cooldown: 2
If foe's Range = 2, reduces damage from
foe's attacks by 30%. Boosts unit's next
attack by total damage reduced (by any
source, including other skills) when Special
triggers. Resets at end of combat. (Skill
cannot be inherited.)
This skill can only be equipped by its original unit.

"As far as the eye can see, Nifl gleams white, snow sparkling under the sun... I love my homeland. That's just one reason."

A militia member from the Crimean countryside.

A princess and the daughter of Chrom with a

Geirskögul
Mt: 16 Range: 1
Grants Def+3. If allies within 2 spaces use
sword, lance, axe, bow, or dagger, grants
Atk/Spd+3 to those allies during combat.
This skill can only be equipped by its original unit.

The eldest princess of Nifl, the Kingdom of


Ice. A gentle and caring soul with strong
maternal instincts.

Blizzard
Mt: 14 Range: 2
Grants Res+3. Grants bonus to unit's
Atk = total penalties on foe during combat.
This skill can only be equipped by its original unit.

Chilling Seal
At start of turn, if unit's HP ≥ 50%, inflicts
Atk/Spd-6 on foe on the enemy team with
the lowest Def through its next action. (Skill
cannot be inherited.)
This skill can only be equipped by its original unit.

"Nifl, the Kingdom of Ice, is bitterly cold during the winter. As children, my sisters and I cuddled as we slept."

Eliwood's friend and brother of the Marquess


of Ostia. Wants to win the big tournament.
Appears in Fire Emblem: The Blazing Blade.

A prince of Askr who's kind and serious.


He's taking part in the spring festival as a
member of the Order of Heroes.

"Sharena's personality suits this sort of getup... My sister has a modern sensibility. But me? Why ME?"

"Memories or no, I will lay waste to the world all the same. You think me so fickle I'd change my mind?"

One of Ryoma's retainers, and a ninja of Hoshido.


She was given the mission to participate in the
Spring Festival, and she's fulfilling that duty.
Appears in Fire Emblem Fates.

Lethal Carrot+
Mt: 12 Range: 2
Deals +10 damage when Special
triggers. After combat, if unit attacked,
inflicts Def/Res-7 on target and foes
within 2 spaces of target through their
next actions.

A young woman from Ram Village, and


Alm's childhood friend. Her devotion to
him stretches back to those days. Appears
in Fire Emblem Echoes: Shadows of Valentia.