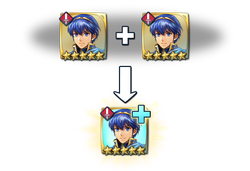 Merge Allies is a feature that allows you to merge duplicates of the same Hero to gain benefits. It can be found under the Ally Growth menu.

There are a few things that can happen when merging depending on the star rarity of the characters used:

The remaining enhanced character will receive the bonuses listed above, but any levels or SP from the source ally will be lost forever.

The amount of SP awarded to the resulting unit after a merge depends on the rarity of the sacrificed unit, as well as the number of merges the sacrifice already had.

For merged source units, each additional unit merged into it previously adds the base SP of that rarity again. For example, merging a 2

When merging two units of the same rarity, two stats will be selected to be increased by one. The two stats selected for each merge are the two highest 5

level 1 raw stats for the character (after considering Asset and Flaw), which have not yet been increased. This repeats for each successive merge, making all stats increased by a total of 2 points each at +5, and 4 points each at +10.

In the case of a tie between two level 1 stats, the first one in the listed order will be chosen, HP > Atk > Spd > Def > Res.

The fact that HP is the highest Level 1 raw stat (without considering Weapon Mt and stat-increasing passives) for every unit means that HP will be one of the increased stats at +1, +3, +6 and +8.

As of Version 3.2.0, if a unit has an Asset and a Flaw, then its first merge will add an additional 3 or 4 points to its Flaw stat, whichever is enough to negate the Flaw. For units that whose traits are normalized, their three highest level 1 raw stats will each gain 1 additional point upon the first merge.

The first merge would increase the HP and Spd, as these are the highest two raw stats.

Merges seven through ten echo the merges two through five.

If this Olwen had an Atk Asset and a Res Flaw, her raw stats would be as follows, introducing ties.

The first merge would increase the HP, as it is the highest stat. To break the tie for second between Atk and Spd, Atk is chosen because it is the first one.

Merges seven through ten echo the merges two through five.

The Hero's icon background color changes depending on the rarity and amount of merges. Summoner Support overrides the standard background and border, but displays merges as 5

You cannot merge favorited heroes into other heroes. You can tell a unit is favorited if there is a heart icon on the character's icon.

Units that are +10 can still be merged for additional SP. However, if a unit is both +10 and has 9999 SP, it cannot accept any more merges.