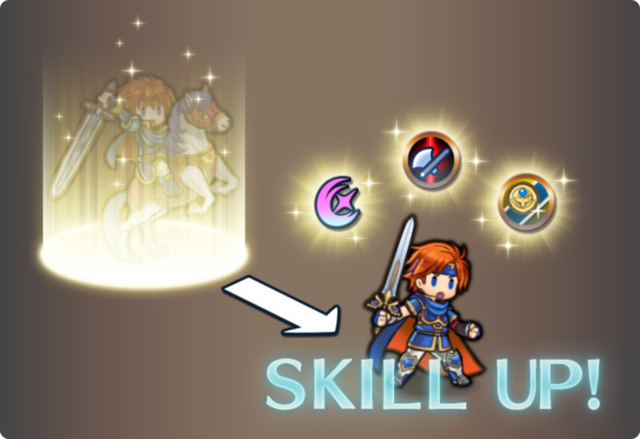 Inherit Skill, a new feature that lets a Hero receive a skill from another Hero, is here. Swing the tide of battle to your advantage by letting your favorite Heroes inherit a variety of skills.

What is Inherit Skill?
This is a new feature that lets a Hero receive a skill from another Hero. Go to Allies → Advanced Growth → Inherit Skill to try it out!

Inherit Skill: Details
You can use Inherit Skill to learn up to three skills at once from a Hero.

A Hero can inherit learned or unlearned skills from another Hero, but it's important to note that a Hero does not immediately learn a skill just by inheriting it. In order to learn the inherited skill, the Hero will need 1.5x the normal amount of SP required to learn that skill.

You will lose the Hero that provided the skills to the other Hero, so use Inherit Skill wisely.

Please Note: Additional Features for Ver 1.2.0
Starting with ver 1.2.0, it is planned that it will become possible to inherit skills that were previously inherited when using Merge Allies.

For example, let's say Marth has inherited the Special Skill Sol. If this Marth that inherited Sol is used as the source character for Merge Allies, the target Marth will also inherit Sol.

In this example, if you performed this action in the current version of the game, Sol would be lost.

"If an ally lacks weapon, support, or special skill, you should make it a priority to teach them one!"