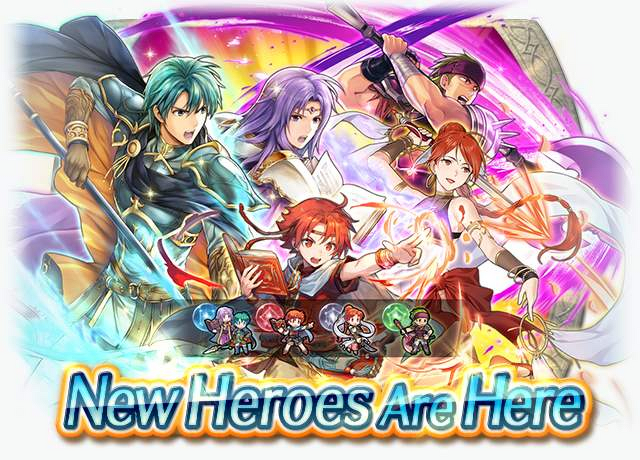 Heroes from previous New Heroes summoning events and their corresponding Forging Bonds events are returning together as simultaneous event revivals!

Note: When you finish a summoning session after having summoned a total of 40 or more times in this summoning event, you will be able to choose one 5★ focus Hero to summon for free for your next summon by tapping the Free 5★ Summon button.


• Heroes might have already learned some skills based on their ★ rating when they joined your team.
Notes on the Free 5★ Summon
・ When you finish a summoning session after having summoned a total of 40 or more times in this summoning event, you will be able to choose one 5★ focus Hero to summon for free for your next summon in this event by tapping the Free 5★ Summon button.


・ The stats of Heroes summoned via the Free 5★ Summon do not have assets or flaws.


The princes of Renais and Grado. As heirs to
allied kingdoms, they were raised with a strong
bond with one another. They appear in Fire
Emblem: The Sacred Stones.

Duo Skill:
Infantry and armored allies within 2 spaces of
unit (including unit) can move 1 extra space.
(That turn only. Does not stack.)
(Duo Skills can be used once per map by
tapping the Duo button. Duo Skills cannot
be used by units deployed using Pair Up.)

"So many Heroes around our age... They'll soon learn that Lyon and I are a force to be reckoned with!"


A veteran soldier who leads his own mercenary
band, Gerik's Mercenaries. He's the commander
of Tethys, Ewan, Marisa, and others. Appears
in Fire Emblem: The Sacred Stones.

"Can't go slackin' off during training. My skill with the blade still ain't much, so I've got to focus to survive."


A member of Gerik's Mercenaries. Tethys's
brother. He reveres Saleh, his teacher. Appears
in Fire Emblem: The Sacred Stones.

The Cleaner+
Mt: 12 Range: 2
Grants bonus to unit’s Atk = total bonuses
on foe during combat. After combat, if unit
attacked, inflicts Def/Res-7 on target and foes
within 2 spaces of target through their next
actions.

"Oh! Have you been watching long? While warriors swing their steel, we dancers train the swing of our hips."

It seems like Duo Heroes will only make their appearance in certain summoning events...but you knew that already, right?