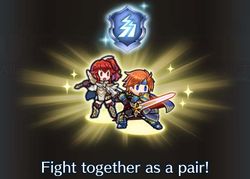 Pair Up is a feature introduced in Version 3.4.0 that allows two units to occupy the same tile on a map, boosting their stats and allowing them to switch places at any time. It can be found under the Interact with Allies menu.

From the Pair Up menu, applicable Legendary Heroes can be assigned a partner unit. When that Legendary Hero enters a map and their partner is not otherwise on the team, the two will enter the map as a pair.

If either unit of a pair possesses a skill like

Dance, other units cannot use skills like Sing or Dance on that pair at all.

If the leader of a pair is defeated, then their cohort will be defeated as well, except in Allegiance Battles and Mjölnir's Strike.

The stat boost granted to the leader during Pair Up is calculated depending on the cohort's stats prior to the beginning of a map, with a maximum boost of +4 to each stat, rounded down. Each stat's boost is calculated separately. Stat alterations that occur after starting a map, such as Blessing effects,

penalties, combat boosts, and combat reductions are not considered in this calculation.