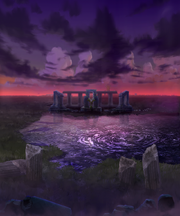 Røkkr Sieges is a gamemode first introduced in Feh Channel (Jun. 6, 2019) where players face off against Røkkr, shadowy enemies that have taken on the form of Heroes.

Havoc Axe items are used in this gamemode as mode-specific stamina. Røkkr Sieges is compatible with

Røkkr enemies have large amounts of HP. To assist in reducing its HP, damage boosts in the form of multipliers are present, and can be increased by defeating other foes. However, the Røkkr can only be defeated by allied armies, which appear at the end of the battle to deal significant damage. Battles end after 7 turns or after a certain amount of damage has been dealt.

The difficulty level selected determines the base value of the maximum damage that can be dealt.

Røkkr Sieges makes use of several skills exclusive to the gamemode.

If the player successfully defeats the Røkkr, one of the following rewards is randomly given to the player: