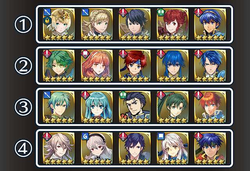 Relay Defense's map are 8 x 6 maps and have camps and fortress.

A fortress and its warp points

A camp and its warp points

The fortress have 3 HP and the player will lose the battle if it is destroyed by the enemy. The camps have 2 HP and can't be take back when they are destroyed
The fortress and the camps are defensive terrain which heal 10 HP at the beginning of each turn if a hero is on them.
The fortress, the camps and the spaces around them are warp points. Heroes can instantly go on those spaces if they are already on a warp point.

In Relay Defense mode, height several selectable difficulties. A level is unlocked only after finishing the previous one.

In order to finish the level, the player need to achieve certain high scores.

The player accumulates points for each enemy defeated and each Hero alive after two turns, capping at 30.

Points are added based on the number of camps held by the player at the end of the stage.

Points are added depending on how well the player defends their fortress. The more HP at the end of the stage, the better.