Resonant Battles is a game mode introduced in Version 4.6.0 that is notably PvE controlled by the AI. It was first presented in Feh Channel (Jun. 15, 2020).

In this mode, you have to defeat thieves that are scattered across the map. Your goal is to reach and defeat them, before they can escape. At the end of a season, you will receive rewards including Hero Feathers, 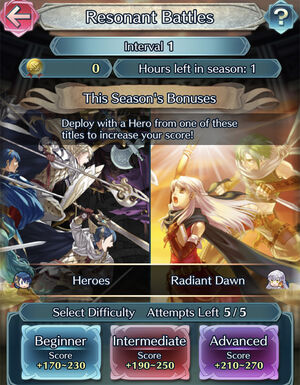 Resonant Battles makes use of several seals exclusive to the gamemode. Only Guardian Heroes are equipped with

Bonus Titles for Resonant Battles follow a certain pattern. These patterns maybe be subject to change, but the currently observed patterns are as follows:

10 maps are used by Resonant Battles. The seasons cycle through the maps below, starting with map 1 on Coliseum season 177 where the game mode debuted.

All Resonant Battles that use the same maps spawn their units on the same position. However, their weapons types and moves types differs. Each maps includ six guardians and six Thiefs. Their is always two

Green Thief, but none

Thief. Those are used below to show their position, without defining a color.