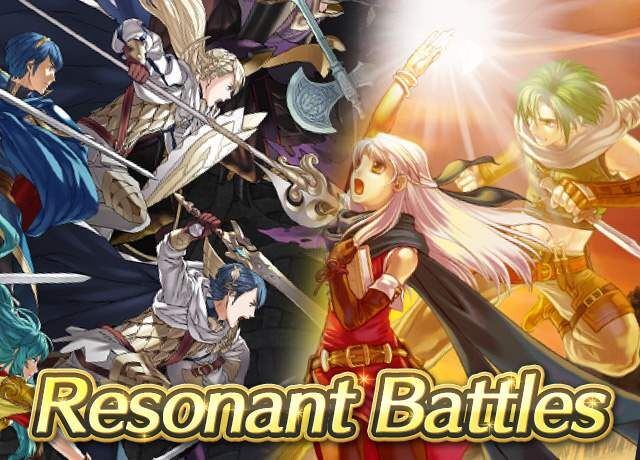 A new way to play, Resonant Battles, is now available in the Coliseum.

Resonant Battles is a special type of battle where you attempt to defeat thieves before they can escape from the map. Fans of the Fire Emblem series of games are probably used to pesky pickpockets swiping items from chests before running off. Here's a chance for a little payback!

Foil their escape to earn rewards such as Divine Codes (Part 1) and Dragonflowers.

More >
■ What is Resonant Battles?


Resonant Battles is a new way to play available in the Coliseum where you attempt to defeat thieves before they can escape from the map. Fans of the Fire Emblem series of games are probably used to pesky pickpockets swiping items from chests before running off. Here's a chance for a little payback!

Deploy Harmonized Heroes and Heroes from games displayed under This Season's Bonuses as you aim to achieve a high score! 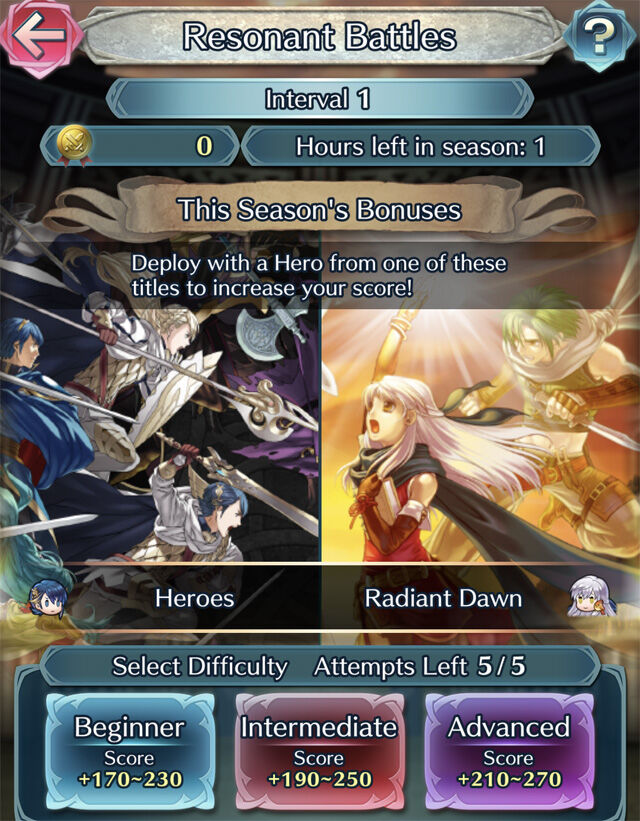 Resonant Battles can be played five times each season. Make sure you've got the right combination of Heroes and skills before you charge into the fray after those thieves! 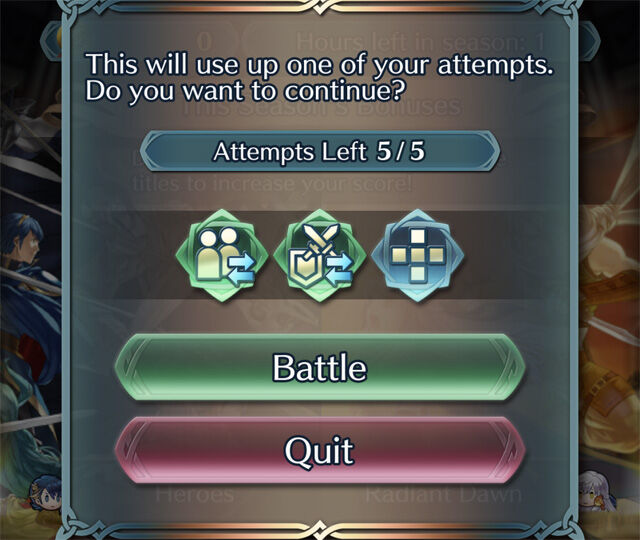 The thieves will move one space each turn, and if they reach a yellow space at the top of the map, they'll escape from the battle. You'll have to chase them down all while avoiding or defeating their bodyguards. The battle will end once all of the thieves on the map have either escaped or been defeated. 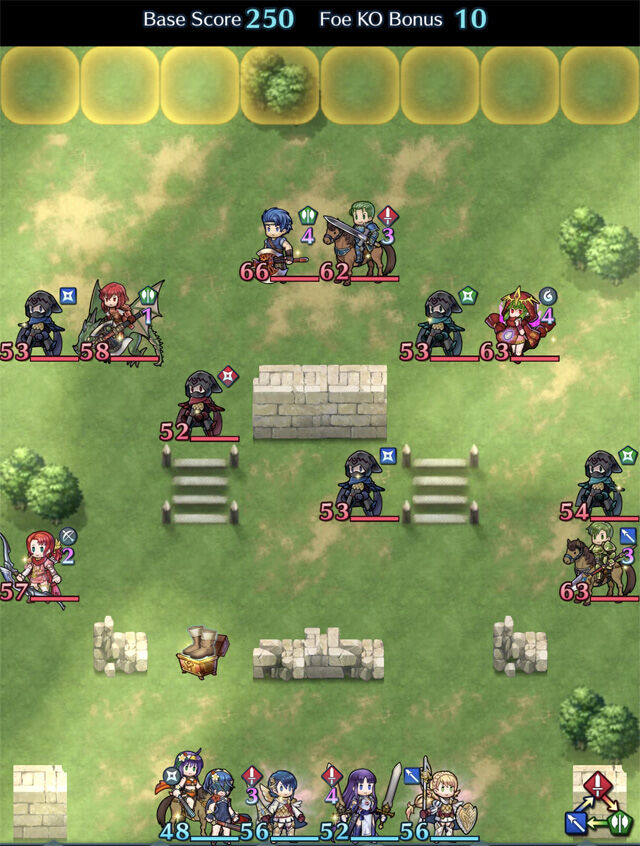 Defeat thieves to obtain various items. These items are the same as those that appear in Arena Assault and will prove invaluable in helping you outmaneuver and overpower the many foes scattered across the map.

Get back here, scoundrels! You can't escape the swift talons of justice!

Notes:
・Pair Up cannot be used in Resonant Battles.
・The strength of the foes that appear in each battle are determined by the highest level among your deployed Heroes, your interval, and the difficulty you choose.

■ Focus on Your Battle Score! 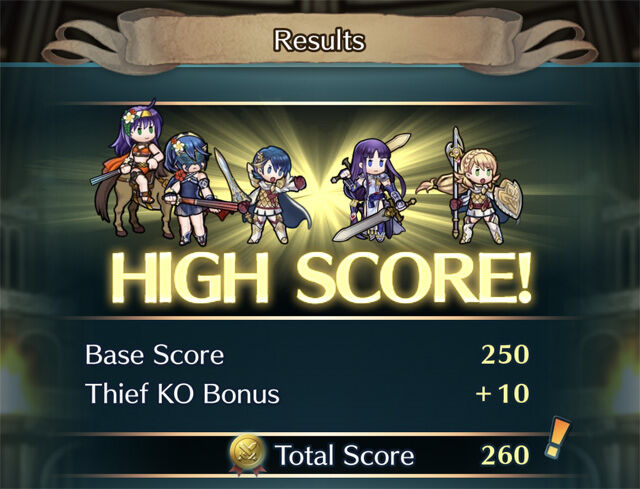 Win a battle to receive a battle score. The following bonuses may be added to your score, so keep them in mind when you're aiming for a boost:

〇 Thief KO Bonus
・Grants a bonus equal to the number of thieves (foe with "Thief" in the name) defeated × 10.

〇 Deployment Bonus
・Grants +10 if one or fewer Heroes with Sing or Dance are deployed.

〇 This Season's Bonuses
・Grants a bonus equal to the number of bonus-title Heroes deployed × 10.

〇 Harmonized Hero Bonus 2
When a Harmonized Hero is from a bonus title and you deploy them, you can earn a higher score.
・Bonus points are calculated based on the number of merges × 1 (up to a max of 20 total merges).

The following deduction may be subtracted from your score:

〇 Defeated Ally
・Applies a deduction of -20 for each deployed ally that is defeated. 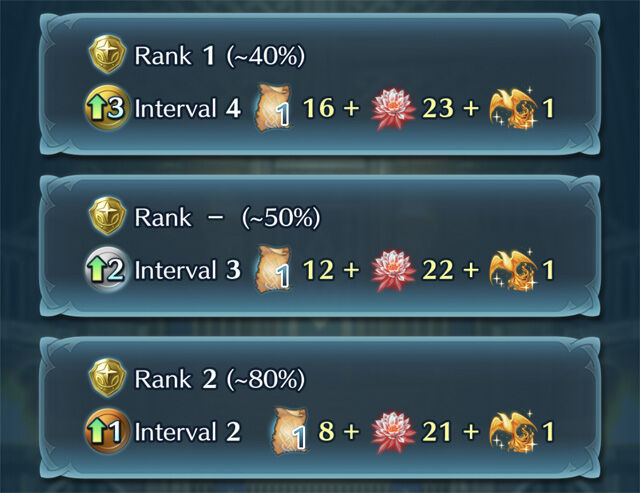 Rewards vary from season to season and may include items such as Divine Codes (Part 1) or Dragonflowers.

When a season ends, you can receive rewards based on your rank (called an interval), and the higher your interval, the more rewards you earn. If your score is high enough, your interval may increase after the event ends.

Aim for the top intervals, and the rewards will be yours!