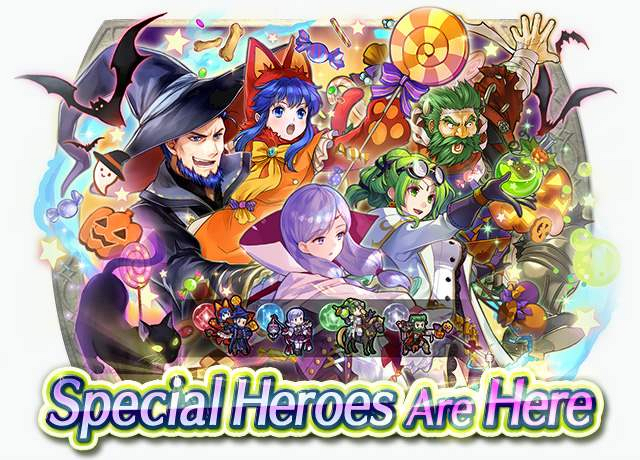 "I've been hearing that, this year...ghosts will be appearing for real! In the eerie light of the moon, they appear, apparitions that know no rest or respite—only hunger!"

Hector: Dressed-Up Duo joins the battle as the first-ever Duo Hero! He and other Special Heroes are available as part of a 5★ summoning focus during this event!

But that's not all... This event's Special Heroes also appear in the new Paralogue story Treat Fiends, and there are some limited-time quests to go along with them. There's even a Log-In Bonus where you can get Orbs up to 10 times before 2019-10-23T06:59:59Z! 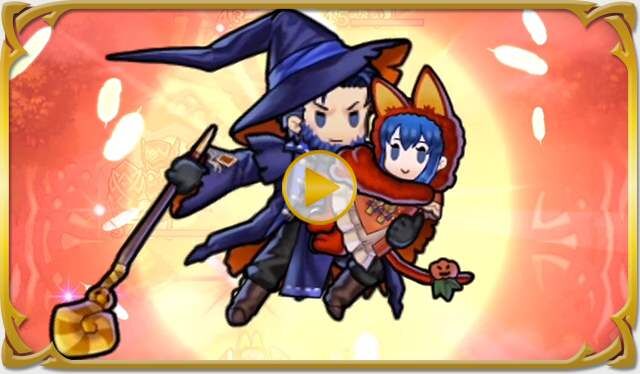 The Marquess Ostia and his daughter. Drawn
to the castle by the delightful glow of the
harvest festival's activities. They appear in Fire
Emblem: The Blazing Blade.

Duo Skill:
Deals 20 damage to foes within 3 columns
centered on unit.
(Duo Skills can be used once per map by
tapping the Duo button. Duo Skills cannot
be used by units deployed using Pair Up.)

Conjurer Curios
Mt: 16 Range: 1
Effective against armored foes. Grants Atk+3.
If it is an odd-numbered turn or if foe's
HP < 100% at start of combat, grants
Atk/Spd/Def/Res+4 to unit during combat.
This skill can only be equipped by its original unit.

"So this is where they're holding the harvest festival this year? Count me in—for Lilina's sake!"

A mage always on the verge of collapsing from
hunger, attracted to the harvest festival by the
sights and smells of delicious foods. Appears in
Fire Emblem: Path of Radiance.

Spooky Censer+
Mt: 12 Range: 2
Grants Atk/Spd/Def/Res+3. After combat,
deals 6 damage to unit.
Note: when Spooky Censer+ is inherited using Inherit Skill, certain Heroes may hold the censer in an unintended way, such as backwards or over their face.
Example:

Atk/Res Gap 3
At start of turn, grants Atk/Res+5 to ally
with the highest Atk+Res total for 1 turn.
(Excludes unit.)

Princess of Rausten. Enthusiastically
participating in the harvest festival
alongside her attendant Dozla. Appears
in Fire Emblem: The Sacred Stones.

Spd/Res Ruse 3
If a Rally Assist skill is used by unit or targets
unit, inflicts Spd/Res-5 and【Guard】on
foes in cardinal directions of unit and target
through their next actions.

"This costume is PERFECT! Who would look at this and imagine me to be the princess of Rausten?"

An attendant in L'Arachel's service. A hearty
man with a thirst for life, who treasures children
above all else. Appears in Fire Emblem: The
Sacred Stones.

"All the little laddies and lassies are beaming! Gwah ha ha! All children deserve to carry beautiful memories."

Be wary of swaying shadows when you walk down spooky streets at night...