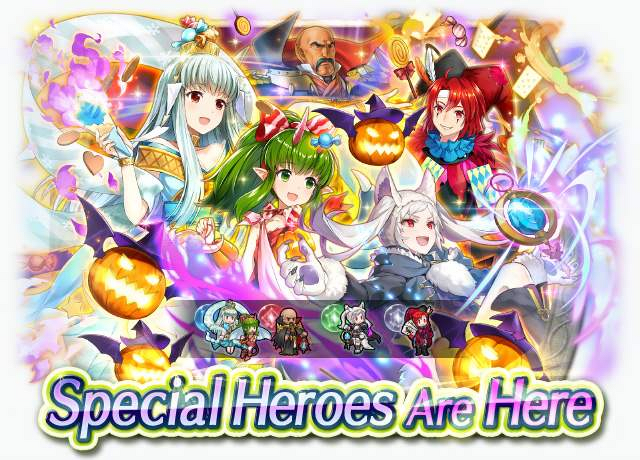 "RAWRR! I'm a scary monster! If you don't give me treats, I'll play a trick on you!"

Four Heroes dressed in frightful outfits are here to enjoy the season's bounty! These Special Heroes are available as part of a 5★ summoning focus during this event!

But that's not all... This event's Special Heroes also appear in the new Paralogue story Dragons Harvest, and there are some limited-time quests to go along with them. There's even a Log-In Bonus where you can get Orbs up to 10 times before 2020-10-21T06:59:59Z! 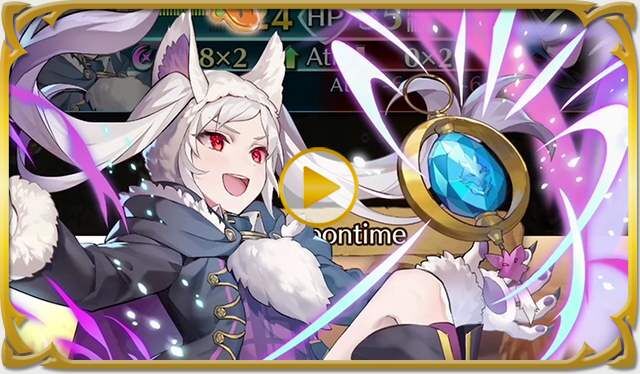 
• Heroes with different illustrations and epithets are treated as different Heroes even if they are the same character. As such, you cannot use them with Merge Allies.
• This summoning event's 5★ category does not include the 5★ focus Heroes who appear in Weekly Revival summoning events.
• To view summoning details, you can tap on List of Heroes at the bottom of the related notification message or tap on Appearance Rates in the Summon menu.


A Divine Dragon and Ice Dragon, Tiki and Ninian
have come to make memories at the harvest
festival. They appear in Fire Emblem: Mystery
of the Emblem / The Blazing Blade.

Harmonized Skill:
Grants【Resonance: Blades】to unit and allies
from the same titles as unit.

Grants another action to ally with the highest
HP that is within 2 spaces, has already acted,
and is from the same titles as unit (excluding
unit). (Allies with Sing or Dance can be granted
this effect as well. If multiple units meet the
conditions, effect will not trigger.)

【Bonus】
All effects that last "for 1 turn" or "that turn
only." Includes bonuses granted by a skill
like Rally or Hone and positive status effects
(extra movement or effects like Dominance).

Rally Up Spd+
Range: 1
Grants Spd+6 to target ally and allies within
2 spaces of target (excluding unit) for 1 turn.
Cannot use:

With Everyone!
At start of turn, if unit is adjacent to an ally,
grants Def/Res+5 to unit and adjacent allies for
1 turn.
This skill can only be equipped by its original unit.


Possessed by the Fell Dragon Grima, Robin has
arrived for the harvest festival. What could she
possibly hope to accomplish? Appears in Fire
Emblem Awakening.

Moonless Breath
Mt: 16 Range: 1
Unit can counterattack regardless of foe's range.
If unit is within 2 spaces of an ally and deals
damage to foe using a Special, restores 30% of
unit's maximum HP. (Triggers even if 0 damage
is dealt.) If foe's Range = 2, calculates damage
using the lower of foe's Def or Res.
This skill can only be equipped by its original unit.

Dragonscale
Neutralizes "effective against flying" bonuses.
If foe initiates combat or if foe's HP = 100%
at start of combat, inflicts Atk/Res-6 on foe
and grants Special cooldown charge +1 per
foe's attack during combat. (Only highest
value applied. Does not stack. Special
cooldown charge granted even if foe’s attack
deals 0 damage.)
This skill can only be equipped by its original unit.

"Candy or death. I can choose for you, if you'd prefer."


A Divine Dragon who discarded his dragonstone
and takes a human form to cause mischief.
Appears in Fire Emblem: Mystery of the Emblem.

Jokers Wild
Mt: 14 Range: 2
Grants HP+5. Unit's Atk/Spd/Def/Res =
highest respective stat from among allies
within 2 spaces during combat. (Calculates
each stat bonus independently at start of
combat. If unit's stat is highest, unit's stat
will decrease.)
This skill can only be equipped by its original unit.

"Trick or treat! Better make with the candy quick. My tricks'll make your head spin!"


One of the Three Heroes who saved Tellius
from chaos. Joined the harvest festival after
hearing dragons are somehow involved.
Appears in Fire Emblem: Radiant Dawn.

Blackfire Breath+
Mt: 14 Range: 1
If unit is not adjacent to an ally, inflicts
Atk/Res-5 on foe during combat and
neutralizes foe's bonuses to Atk/Res (from
skills like Fortify, Rally, etc.) during combat.
If foe's Range = 2, calculates damage using
the lower of foe's Def or Res.

Sturdy Stance 3
If foe initiates combat, grants Atk/Def+6 during
combat and inflicts Special cooldown charge -1
on foe per attack. (Only highest value applied.
Does not stack.)
Cannot use:

"Imagine this festival celebrated by all peoples, hand-in-hand... That is something to aspire to."

These two dragons from different worlds make a great tag-team!