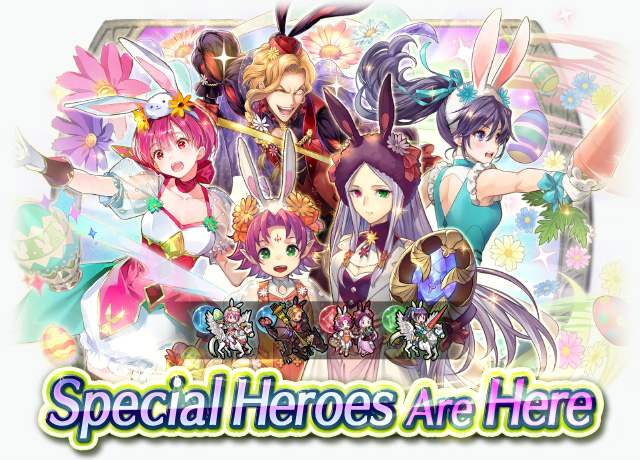 "Heh... This look is devastating! Words fail to capture it! So come closer... I'll show you true devastation!"

Spring is in full bloom! These Special Heroes are attending the spring festivities in rabbit-themed outfits and are available as part of a 5★ summoning focus during this event!

But that's not all... This event's Special Heroes also appear in the new Paralogue story Familial Festivities, and there are some limited-time quests to go along with them. There's even a Log-In Bonus where you can get Orbs up to 10 times before 2020-04-01T06:59:59Z!

Notes:
・ Idunn: Dragonkin Duo is both a Duo Hero and a Special Hero, and will no longer be available to summon after this event ends.
・ Idunn: Dragonkin Duo and other Special Heroes may or may not appear again in a summoning event held in the future.
・ This summoning event includes a 4★ focus category with an initial appearance rate of 3%. Narcian: Vernal General is also available as part of this 4★ focus category. Your 5★ and 5★ focus appearance rates will not reset if you summon this Hero at 4★ rarity. 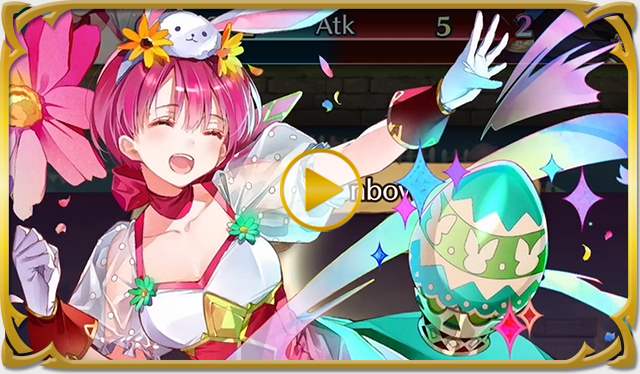 The last of the dragonkin on the continent Elibe.
They heard about the spring festival and are
trying the costumes out for themselves. They
appear in Fire Emblem: The Binding Blade.

Duo Skill:
Grants Def/Res+6 and the following status to
unit and allies within 5 rows and 5 columns
centered on unit for 1 turn: "Neutralizes
'effective against dragons' bonuses and
'effective against armored' bonuses."
(Duo Skills can be used once per map by
tapping the Duo button. Duo Skills cannot
be used by units deployed using Pair Up.)

Zephyr Breath
Mt: 16 Range: 1
Effective against armored foes. Grants Res+3.
If a bonus granted by a skill like Rally or Hone
is active on unit or if unit is within 2 spaces of
an ally, neutralizes unit's penalties and inflicts
Atk-6 on foe during combat, and foe cannot
make a follow-up attack. If foe's Range = 2,
calculates damage using the lower of foe's Def
or Res.
This skill can only be equipped by its original unit.

Sturdy Stance 3
If foe initiates combat, grants Atk/Def+6 during
combat and inflicts Special cooldown charge -1
on foe per attack. (Only highest value applied.
Does not stack.)
Cannot use:

"I am Idunn, and this child is Fae. She desires to see the spring festival...and I am bound to her by duty."

Youngest of the three Pegasus Sisters from
Macedon. She's come to the spring festival
as a bunny, just like her sisters. Appears in
Fire Emblem: Mystery of the Emblem.

Eagle's Egg
Mt: 14 Range: 2
Grants Atk+3. If unit is within 2 spaces of an
ally, grants Atk/Spd/Def/Res+5 to unit and
neutralizes unit's penalties during combat.
This skill can only be equipped by its original unit.

Chill Atk/Res 2
At start of turn, inflicts Atk/Res-5 on foe on
the enemy team with the highest Atk+Res total
through its next action.

"Hippity-hop! Look at me, I'm a rabbit! My sisters won't hop around with me, but if they did we'd be soooo cute!"

Daughter of the warrior Bartre and the
swordmaster Karla. She has taken a moment
away from training to visit the spring festival.
Appears in Fire Emblem: The Binding Blade.

Air Orders 3
At start of turn, grants the following status to
adjacent flying allies for 1 turn: "Unit can move
to a space adjacent to any ally within 2 spaces."
Cannot use:

"I'd much rather be sword fighting, but if we're here to celebrate, then I'll give it my all!"

One of the three Wyvern Generals of Bern.
Making a rare exception, he is donning an
unusual outfit just for the spring festival.
Appears in Fire Emblem: The Binding Blade.

Gilt Fork+
Mt: 14 Range: 1
If unit is within 2 spaces of an ally, grants
Atk/Def+5 to unit and neutralizes unit's
penalties to Atk/Def during combat.

Lance Exp. 3
While unit lives, all lance allies on team get
2x EXP. (Only highest value applied. Does
not stack.)
Cannot use:

"The epitome of beauty. The pillar of wisdom. The embodiment of springtime. In one word: Narcian."

I know swords beat axes, but what's strong against a carrot?