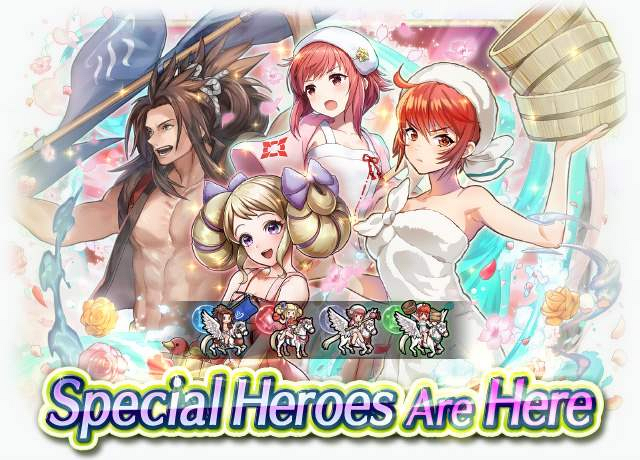 Look sharp, everybody! Right now, our
top priority is heading to a hot spring!
We'll break those contracts, and release
the Hoshidan and Nohrian royalty!

These Special Heroes are available as part of a 5★ summoning focus during this event!

But that's not all... These Special Heroes also appear in the new Paralogue story Hostile Springs, and there are some limited-time quests to go along with them. There's even a Log-In Bonus where you can get Orbs up to 10 times before 2019-02-06T06:59:59Z! 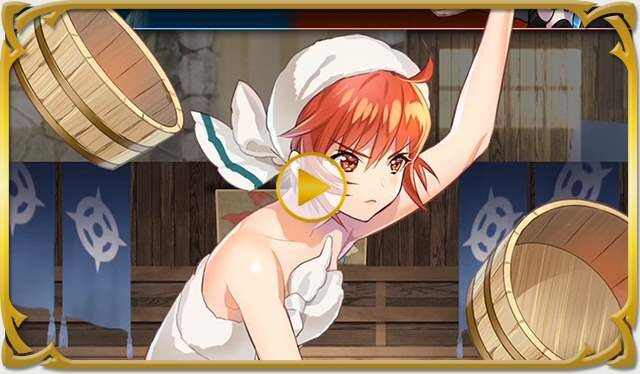 High Prince of Hoshido. A font of knowledge
about remote and hidden hot springs. Appears in
Fire Emblem Fates.

"When I'm soaking in the bath, I may look relaxed, but I keep my blade in reach. If foes attack, I will be ready."

Eldest princess of Hoshido. She seeks respite
from the travails of battle in hot springs from
time to time, but she rarely finds it. Appears in
Fire Emblem Fates.

Splashy Bucket+
Mt: 12 Range: 2
Effective against dragon foes. Disables foe's
skills that "calculate damage using the lower of
foe's Def or Res" and "calculate damage from
staff like other weapons." After combat, if unit
attacked, inflicts Def/Res-7 on foes within 2
spaces of target through their next actions.

Air Orders 3
At start of turn, grants the following status to
adjacent flying allies for 1 turn: "Unit can move
to a space adjacent to any ally within 2 spaces."
Cannot use:

"In Hoshido, it's a custom to go to the hot springs in winter. They're just the thing to warm up when it's cold out."

Grandscratcher+
Mt: 12 Range: 2
At the start of turn 1, grants Special cooldown
count-1 to ally with the highest Atk. (If that ally
does not have a Special skill, this skill has no
effect.)

Fireflood Balm+
Cooldown: 1
When healing an ally with a staff, grants
Atk/Res+6 to all allies for 1 turn.
This skill can only be equipped by staff users.

"Soaking in a hot spring is good for both body and soul. I'm never happier than after a good soak!"

Youngest princess of Nohr. Sometimes slips out
of the castle to enjoy herself at a famous hot
spring. Appears in Fire Emblem Fates.

Red-Hot Ducks+
Mt: 12 Range: 2
If unit's Spd > foe's Spd, deals damage = 70%
of difference between stats. (Maximum bonus
of +7 damage. Combos with Phantom Spd.)
After combat, if unit attacked, inflicts
Def/Res-7 on foes within 2 spaces of target
through their next actions.

"Ooh, the hot spring made my skin nice and smooth. Gorgeous!"

"Remember—this is a mission! No time to relax!"