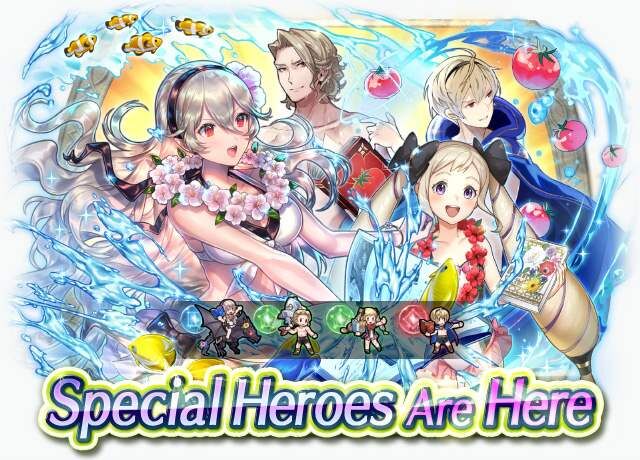 Seeking out a tropical breeze, these swimsuit-clad Special Heroes are back! They're here to keep cool and get the most out of summer as a part of a 5★ summoning focus!

"I'd like to see Askran beaches after the sun has set. The nighttime sea is like a blanket of darkness. It's a rather beautiful sight. Don't you agree?"

A Hoshidan princess raised in Nohr. She won
a ticket to a tropical island in a lottery.
Appears in Fire Emblem Fates.

"I'll do my best right up to the end of summer!"

A Nohrian prince who wields the divine sword
Siegfried but can't swim. Clings to his Lilith
water toy. Appears in Fire Emblem Fates.

"Could it be I'm more suited to fighting in a swimsuit?"

A Nohrian princess who loves her siblings and
has matured a little by taking a solo trip to a
tropical island. Appears in Fire Emblem Fates.

G Tome Valor 3
While unit lives, all green tome allies on team get
2x SP. (Only highest value applied. Does not
stack.)
Cannot use:

"Is this what my big sis meant by 'Summer helps a lady mature'?"

"Oh my! There sure are a lot of wonderful swimsuit-clad Heroes around!"