"A treasure hunt? What am I hunting, exactly?"

Four Heroes dressed in pirate outfits are here to playfully pillage and plunder! These Special Heroes are available as part of a 5★ summoning focus during this event!

But that's not all... This event's Special Heroes also appear in the new Paralogue story Pirate's Pride, and there are some limited-time quests to go along with them. There's even a Log-In Bonus where you can get Orbs up to 10 times before 2020-08-21T06:59:59Z! 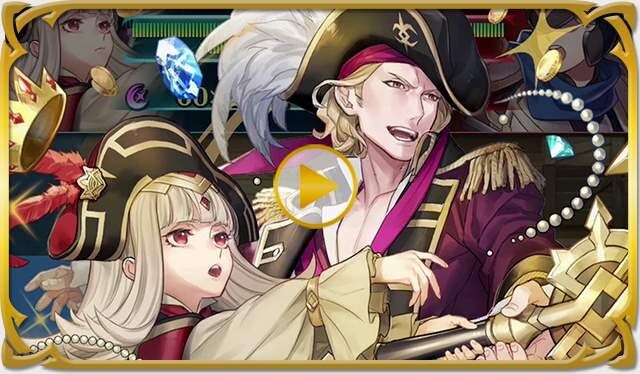 Veronica, princess of Embla, and Xander, crown
prince of Nohr. They're joining the pirate festival
for insight into their peoples' hearts. They
appear in Fire Emblem Heroes/Fates.

Harmonized Skill:
Grants【Resonance: Shields】to unit and allies
from the same titles as unit.

Gate-Anchor Axe
Mt: 16 Range: 1
Accelerates Special trigger (cooldown count-1).
If unit is not adjacent to an ally, grants
Def/Res+5 to unit and inflicts Def/Res-5 on foe
during combat and unit makes a guaranteed
follow-up attack.
This skill can only be equipped by its original unit.

Atk/Def Solo 4
If unit is not adjacent to an ally, grants
Atk/Def+7 during combat.

Atk/Def Gap 3
At start of turn, grants Atk/Def+5 to ally
with the highest Atk+Def total for 1 turn.
(Excludes unit.)

"I am Veronica, Princess of Embla. Xander here will explain why we are dressed as pirates."

King of Phoenicis, the nation of the Hawk Tribe
of laguz. Swooping in just in time to participate
in the pirate festival by coincidence. Appears in
Fire Emblem: Radiant Dawn.

Sky-Pirate Claw
Mt: 14 Range: 1
Accelerates Special trigger (cooldown count-1).
If unit is not adjacent to an ally, grants Atk+5
to unit and inflicts Atk-5 on foe during combat
and unit makes a guaranteed follow-up attack.

At start of turn, if unit is adjacent to only beast
or dragon allies or if unit is not adjacent to any
ally, unit transforms (otherwise, unit reverts). If
unit transforms, unit can move 1 extra space.
(That turn only. Does not stack.) If unit
transforms, grants Atk+2.
This skill can only be equipped by its original unit.

Dive-Bomb 3
At start of combat, if both unit's and foe's
HP ≥ 80% and unit initiates combat, unit
can make a follow-up attack before foe
can counterattack.
Cannot use:

"I love a good breeze, be it off the sea or when I'm soaring among the clouds. Say, ever been rocked to sleep on a boat? You should try it."

Gallant and determined, she was separated
from her family as a child and raised by a pirate
leader. Appears in Fire Emblem: Genealogy of
the Holy War.

Helm Bow+
Mt: 12 Range: 2
Effective against flying foes. If unit is not
adjacent to an ally, inflicts Spd/Def-5 on foe
and neutralizes foe's bonuses to Spd/Def (from
skills like Fortify, Rally, etc.) during combat.

"My crew's a chivalrous bunch! Don't go lumping us in with other pirates. We're different."

A former merchant captain. Prevented by war
from pursuing his business, he reluctantly took
up piracy for a time. Appears in Fire Emblem:
The Binding Blade.

Flowing Lance+
Mt: 14 Range: 1
If unit is not adjacent to an ally, inflicts
Atk/Def-5 on foe and neutralizes foe's
bonuses to Atk/Def (from skills like Fortify,
Rally, etc.) during combat.

"I keep my promises 'cause trust isn't something gold can buy. That's what I learned working the family business."

This may be a pirate festival, but don't be fooled—Brigid and Geese are the real deal!