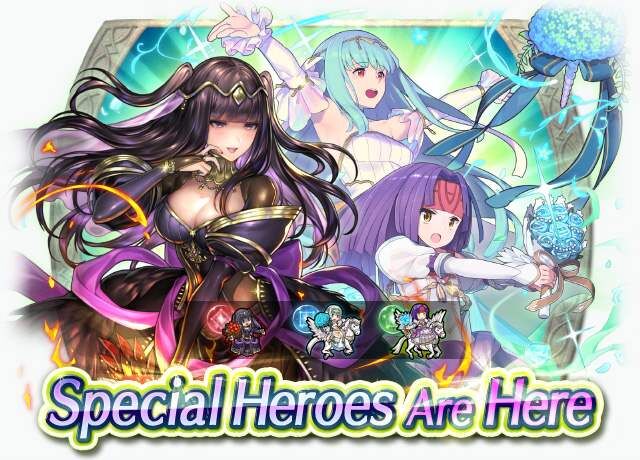 Special Heroes dressed in elegant gowns are back! You can pick them up while they're available as part of this 5★ summoning focus!

A mage from Plegia with a dark side and a
possessive streak. Determined to get her hands
on the festival's prize, a bouquet. Appears in
Fire Emblem Awakening.

Múspell Fireposy
Mt: 14 Range: 2
Grants Spd+3. During combat, boosts
unit's Atk/Spd by number of allies within
2 spaces × 2. (Maximum bonus of +6
to each stat.)
This skill can only be equipped by its original unit.

Spd Feint 3
If a Rally Assist skill is used by unit or targets
unit, inflicts Spd-7 on foes in cardinal directions
of unit through their next actions.
Cannot use:

"Love is a hex that binds two souls for as long as they both shall live. Whether I'm the hexed or the one doing the hexing... I'm ready."

A young dancer who has a serene and mystical
presence. Her travels took her on a path that
led to a festival celebrating brides. Appears in
Fire Emblem: The Blazing Blade.

Fresh Bouquet+
Mt: 12 Range: 2
At start of turn, if unit is adjacent to an ally,
grants Spd+4 to unit and adjacent allies for
1 turn.

"I must admit, I'm not well versed in wedding customs... Is it proper for a bride to dance in her dress?"

Empress of Begnion. Known as the Apostle,
voice of the goddess. Curiosity led her to
participate in a festival about brides.
Appears in Fire Emblem: Path of Radiance.

Nifl Frostflowers
Mt: 14 Range: 2
Grants Atk+3. During combat, boosts
unit's Atk/Spd by number of allies within
2 spaces × 2. (Maximum bonus of +6
to each stat.)
This skill can only be equipped by its original unit.

"Sigrun and Tanith of the Holy Guard are my personal guards. What would they say if they saw me wearing this?"

"The black dress looks mature, but it's super cute too!"