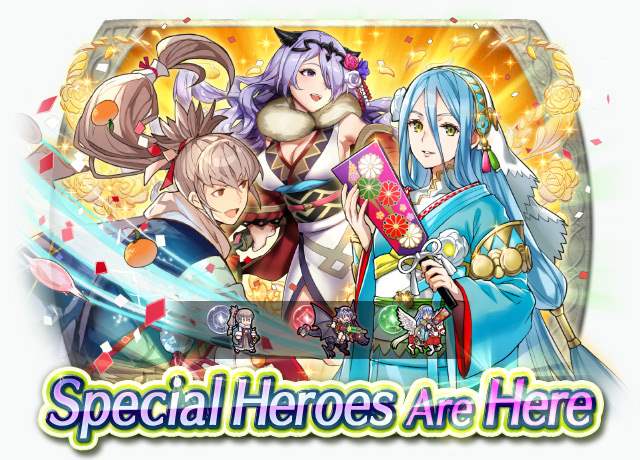 Special Heroes are back to ring in the new year, and they're dressed to impress! You can pick up these Special Heroes as part of a 5★ summoning focus!

A princess of Nohr who dotes on her sibling
Corrin and is trying to learn about Hoshidan
culture through fashion. Appears in Fire
Emblem Fates.

"We were celebrating the new year in kimono as a symbol of friendship with Hoshido. It's important to understand each other's cultures if you want to get along."

The Hoshidan prince who wields the divine
bow Fujin Yumi. Loves miso soup, but loves
ozoni, eaten at the New Year, just as much.
Appears in Fire Emblem Fates.

Kagami Mochi+
Mt: 12 Range: 2
Accelerates Special trigger (cooldown
count-1). After combat, if unit attacked,
inflicts Def/Res-7 on target and foes within
2 spaces of target through their next actions.

An enchanting princess raised in Hoshido
who has never lost a match of the traditional
sport hanetsuki when played at the New
Year. Appears in Fire Emblem Fates.

"Who was the first Hero you summoned this year? They were the first to answer your call, so... Well, you should hold that memory especially dear."

"Everyone looks so lovely all dressed up!"