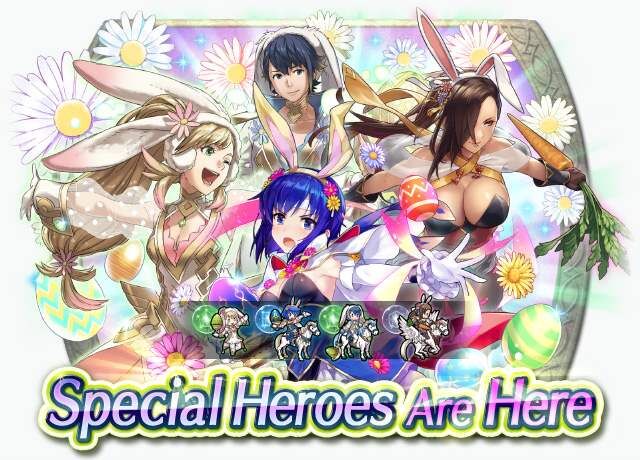 When you're dressed like this, you have to try to talk like a rabbit!
"I'm hoppin' on down to the spring festival!" is a good start.

Middle of three sisters who are pegasus knights
for Macedon. She takes her duty to participate
in the Spring Festival seriously. Appears in Fire
Emblem: Mystery of the Emblem.

Huginn's Egg
Mt: 14 Range: 2
Grants Res+3. At start of turn, if unit's
HP ≥ 50%, inflicts Atk/Def-5 on foe
on the enemy team with the lowest Res
through its next action.
This skill can only be equipped by its original unit.

"I have never really had the chance to pause and enjoy the changing of the seasons before... Spring really is lovely, isn't it?"

A prince of Askr who's kind and serious.
He's taking part in the spring festival as a
member of the Order of Heroes.

"My father is stern and very serious... I think seeing me in this getup would probably make him faint."

Princess of Askr and Alfonse's younger sister.
She cajoled her brother into participating
in the Spring Festival with her.

Muninn's Egg
Mt: 14 Range: 2
Grants Res+3. At start of turn, if unit's
HP ≥ 50%, inflicts Atk/Res-5 on foe
on the enemy team with the lowest Spd
through its next action.
This skill can only be equipped by its original unit.

"My mother loves festivals. I'm sure she'd be delighted if I dropped by to say hello dressed like this!"

One of Ryoma's retainers, and a ninja of Hoshido.
She was given the mission to participate in the
Spring Festival, and she's fulfilling that duty.
Appears in Fire Emblem Fates.

Lethal Carrot+
Mt: 12 Range: 2
Deals +10 damage when Special
triggers. After combat, if unit attacked,
inflicts Def/Res-7 on target and foes
within 2 spaces of target through their
next actions.

"Look out for Kagero's Lethal Carrot!"