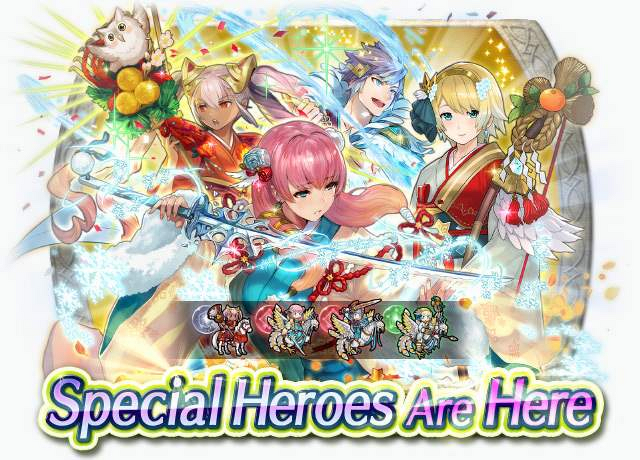 Special Heroes from Nifl, the Kingdom of Ice, and Múspell, the Kingdom of Flame, decked out in a festive Japanese style are back! You can pick them up while they're available as part of this 5★ summoning focus!

The eldest princess of Nifl, the Kingdom of Ice.
A gentle soul with strong maternal instincts. She
is very much looking forward to her first dream
of the New Year.

Hikami
Mt: 16 Range: 1
Grants Spd+3. At start of turn, inflicts
Atk/Spd/Def/Res-4 on nearest foes within 4
spaces through their next actions.
This skill can only be equipped by its original unit.

Joint Hone Spd
At start of turn, if unit is adjacent to an ally,
grants Spd+5 to unit and adjacent allies for
1 turn.

"Will you be taking an omikuji? It's kind of like a kind of lottery, is it not? I find the idea interesting..."

The gentle second princess of Nifl, the
Kingdom of Ice. Her joy in joining Laegjarn and
the others for a trip to the shrine shines through.

Kabura Ya+
Mt: 12 Range: 2
Effective against flying foes. At start of turn,
inflicts Spd-7 on foe on the enemy team with
the highest Spd through its next action.

"Thank you for inviting me to accompany you to the shrine. I already know what I'll wish for... And I hope your wish comes true, too."

The second princess of Múspell, the Kingdom
of Flame. She keeps her emotions in check but
can't relax without her blade by her side.

Kumade+
Mt: 12 Range: 2
At start of turn, inflicts Atk/Spd-5 on foe
on the enemy team with the highest
Def through its next action.

"When we visit the shrine...and perform the rite Laegjarn told me about...I will succeed!"

The eldest prince of Nifl, Kingdom of Ice. With a
steady, calm demeanor, he's always prepared for
danger, even when on a simple trip to a shrine.

Geishun+
Mt: 14 Range: 1
At start of turn, inflicts Atk-7 on foe
on the enemy team with the highest
Atk through its next action.

Hone Atk 4
At start of turn, grants Atk+7 to adjacent allies
for 1 turn.

"I've just eaten some sort of soft and white delicacy for the first time. It was called...mochi?"

I hope everyone's starting the year off right!