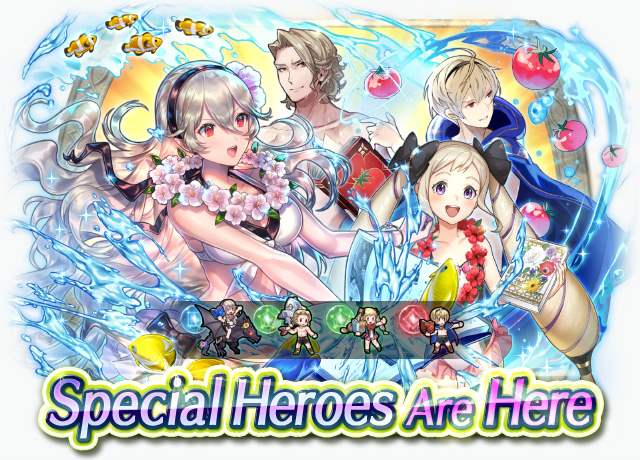 Drawn by the tropical breeze, four Special Heroes have returned in their swimsuits! You can pick them up while they're available as part of this 5★ summoning focus!

A Nohrian princess who loves her siblings and
has matured a little by taking a solo trip to a
tropical island. Appears in Fire Emblem Fates.

G Tome Valor 3
While unit lives, all green tome allies on team get
2x SP. (Only highest value applied. Does not
stack.)
Cannot use:

"I took a trip to a tropical island all by myself. Doesn't that sound...mature? I'm inching closer to being a perfect lady, aren't I? Well, aren't I?"

A Nohrian prince who wields the divine sword
Siegfried but can't swim. Clings to his Lilith
water toy. Appears in Fire Emblem Fates.

"Does the Order of Heroes allow for vacations? We'll take care of the enemy. You go relax on the beach. It...can be fun."

A Hoshidan princess raised in Nohr. She won
a ticket to a tropical island in a lottery.
Appears in Fire Emblem Fates.

"I've never seen tropical fish before so I got this book that's all about them. Would you like to read it with me? Experiencing something for the first time is much better if I can share it with someone else!"

"Me? I was reading treatises on botany—summer vegetation specifically. It seems there are many varieties of tomato plants in other lands..."

Oh my! There sure are a lot of wonderful swimsuit-clad Heroes around!