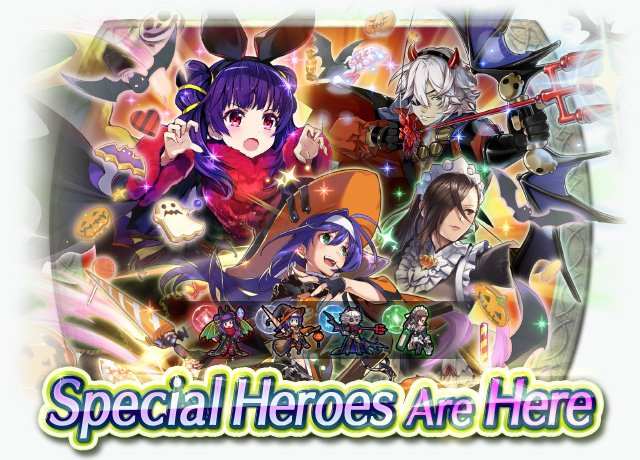 Costume-clad Special Heroes ready for a spooky night are back! You can pick them up while they're available as part of this 5★ summoning focus!

A manakete who is much older than her
appearance suggests. She'd like some candy
but is a little shy about asking for it. Appears in
Fire Emblem: The Sacred Stones.

"I hear you're supposed to play a trick on someone if they don't give you treats, but... Oh, I could never do anything so mean to someone. I guess it's OK if I don't get any treats..."

A ninja of Hoshido who is ready to lay down her
life to obtain some candy. One of Ryoma's
retainers. Appears in Fire Emblem Fates.

Bottled Juice+
Mt: 12 Range: 2
Inflicts Special cooldown charge -1 on foe per
attack during combat. (Only highest value
applied. Does not stack.) After combat, if unit
attacked, inflicts Def/Res-7 on target and foes
within 2 spaces of target through their next
actions.

"This is a traditional maid outfit from Nohr. Maids are similar to ninja in that we are both dedicated to a master."

Nohrian scoundrel who wags his saucy tongue
at everyone. One of Leo's retainers. Hopes to
have a night to remember at the harvest
festival. Appears in Fire Emblem Fates.

Fortify Armor
At start of turn, grants Def/Res+6 to adjacent
armored allies for 1 turn.
Cannot use:

"The name's Niles... Is it a trick you want or a treat? Whichever it is your heart desires...I'll see it done."

A mercenary fighting to improve her sword
skills. She can't wait to get to the harvest
festival. Appears in Fire Emblem: Radiant
Dawn.

Witchy Wand+
Mt: 12 Range: 2
After combat, if unit attacked, resets Special
cooldown of target and foes within 2 spaces of
target, and inflicts the following status on
target and foes within 2 spaces of target
through their next actions: "Inflicts Special
cooldown charge -1 per attack during combat.
(Only highest value applied. Does not stack.)"
(Neutralizes Special cooldown count reductions
after combat, but skills that Accelerate and
Slow Special are still effective.)

Heavenly Light
Cooldown：2
When healing an ally with a staff, restores 10 HP
to all allies.
This skill can only be equipped by staff users.

"An ambush would be a good trick to play on someone... But where should I hide? Huh? You overheard me just now? I meant, um...a friendly ambush."

I hear if you eat too many treats, you can get a tummyache!