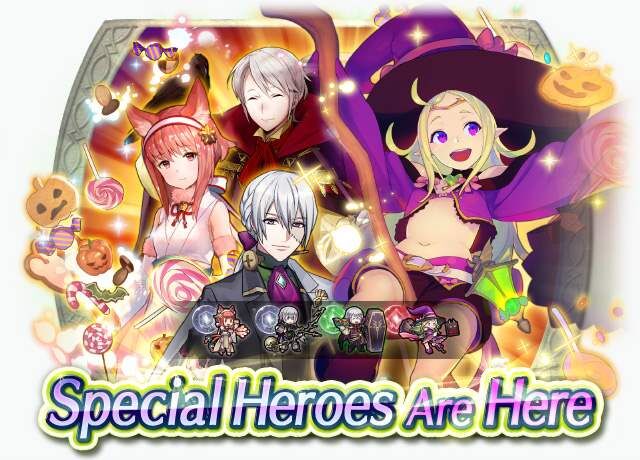 Candy-hungry Special Heroes ready to rock the Harvest Festival are back! You can pick them up while they're available as part of this 5★ summoning focus!

Manakete who travels with Chrom's group. She
may be over a thousand years old, but she still
gets candy. Appears in Fire Emblem Awakening.

Grimoire
Mt: 14 Range: 2
If unit's HP ≥ 50%, unit can move to a
space adjacent to an ally within 2 spaces.
This skill can only be equipped by its original unit.

A butler of Nohr who serves Corrin. He would
rather receive tea than candy. Appears in
Fire Emblem Fates.

Monstrous Bow+
Mt: 12 Range: 2
Effective against flying foes. After combat, if
unit attacked, converts bonuses on foes
within 2 spaces of target into penalties
through their next actions.

"Would you like to carve a pumpkin lantern with me? It might be fun—I mean, it might be more efficient if we cooperated to complete the task."

This Hoshidan princess is so kind that she
wouldn't play a trick on anyone, even if they
didn't give her candy. Appears in Fire Emblem
Fates.

Kitty Paddle+
Mt: 8 Range: 2
Effective against magic foes. After combat,
if unit attacked and if foe uses magic, inflicts
Def/Res-7 on foe through its next action.

"Dressed like this, I... I can't really use my staff. But if you need healing, please ask. I can still help a little."

This dark mage of Plegia will curse you without
a second thought if you withhold candy.
Appears in Fire Emblem Awakening.

Spectral Tome+
Mt: 12 Range: 2
After combat, if unit attacked, converts
bonuses on foes within 2 spaces of target
into penalties through their next actions.

"It's a harvest festival, right? So we should go harvest some candy! Or maybe you'd rather harvest the heads of our enemies... I'm up for either one!"

I hope I get treats instead of tricks...