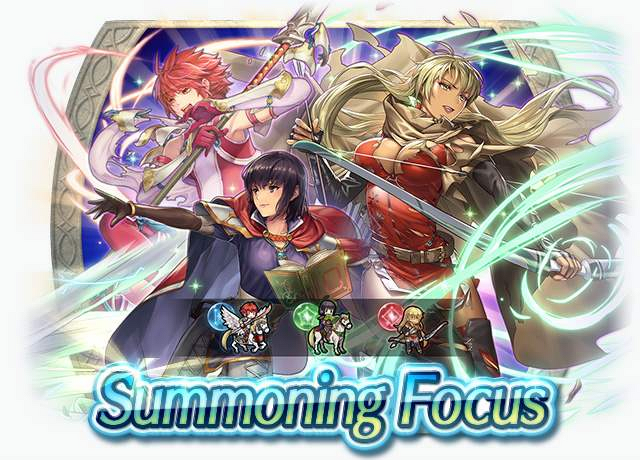 Three Heroes with the Blazing Wind Special skill are available as part of a 5★ summoning focus!

Heroes with Blazing Wind can inflict damage on foes in an area near their target before they initiate combat.

Daughter of Hawkeye and protector of Nabata.
Although she has lost her family, she is stalwart
in her duty. Appears in Fire Emblem: The
Binding Blade.

Guardian's Bow
Mt: 14 Range: 2
Accelerates Special trigger (cooldown count-1).
Effective against flying foes. If unit's Spd > foe's
Spd at start of combat or during combat, inflicts
Atk/Spd/Def-5 on foe during combat. (If unit
and foe both have this weapon equipped, effect
is calculated first for whoever initiates combat.)
This skill can only be equipped by its original unit.

"We had a good hunt today. I'll make you a stew with the meat. Hope you're hungry."

A mage knight in Friege's army. She
now walks her own path after parting
ways with her beloved brother, Reinhardt.
Appears in Fire Emblem: Thracia 776.

Thunderhead
Mt: 14 Range: 2
Grants bonus to unit’s Atk = total bonuses on
unit during combat.
This skill can only be equipped by its original unit.

G Tome Exp. 3
While unit lives, all green tome allies on team
get 2x EXP. (Only highest value applied.
Does not stack.)
Cannot use:

"Sometimes, I lose my temper... One time, I even pointed my sword at a superior officer. My brother would have been quite disappointed, had he heard about it."

Hoshidan princess who prefers battles over
court life. Excels at watching over others.
Appears in Fire Emblem Fates.

Hinoka's Spear
Mt: 16 Range: 1
If unit is within 2 spaces of a flying or infantry
ally, grants Atk/Spd+4 during combat.
This skill can only be equipped by its original unit.

"I was just tending to my pegasus. Their wings are so downy in a few places. Want to feel it for yourself?"