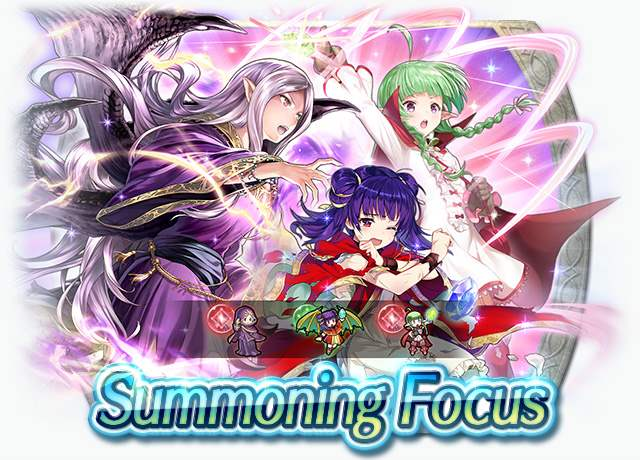 Three Heroes with the Bonfire skill, a Special skill that boosts damage by 50% of their Def, are available as part of a 5★ summoning focus!

"Um... I have a request. Would you mind watching over me while I take a nap? I don't like sleeping alone."

Transformed into a Demon Dragon and sealed
during the Scouring. She was awoken by Zephiel
and serves him so he may realize his ambition.
Appears in Fire Emblem: The Binding Blade.

Demonic Breath
Mt: 16 Range: 1
Grants Def+3. Effective against armored
foes. At start of combat, if a negative status
effect is active on unit, or if unit's HP < 100%,
neutralizes penalties on unit and grants
Atk/Spd/Def/Res+4 during combat. If foe's
Range = 2, calculates damage using the
lower of foe's Def and Res.
This skill can only be equipped by its original unit.

"I am the Demon Dragon, destroyer of humans... As His Highness desires."

Nowi's daughter. She might look young, but
she's actually very responsible. She tries to
control her emotions and act maturely. Appears
in Fire Emblem Awakening.

Oracle's Breath
Mt: 16 Range: 1
Grants Atk+3. If a bonus granted by a skill like
Rally or Hone is active on unit, foe cannot make
a follow-up attack. If foe's Range = 2, calculates
damage using the lower of foe's Def or Res.
This skill can only be equipped by its original unit.

"I'm still inexperienced in the ways of Manakete. Sometimes I have trouble fighting the urge to go wild... So if I lose control, I want you to take me out to a forest where I can't hurt anyone. All right?"

Use high defense to boost your offensive power!