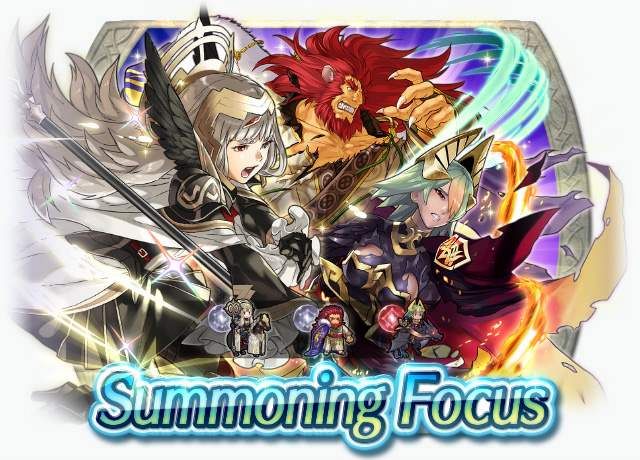 Three Heroes with Guard skills are available as part of a 5★ summoning focus!

Heroes with Guard skills grant up to Def/Res+4 to allies within 2 spaces if the foe uses a certain type of weapon.

"I had no talent for war, so I had to think very hard about what someone like me could contribute. Weak as I was, I found a way to survive in Múspell."

The lion ruler of Gallia, the home of the beast
tribe of laguz. Uses his wisdom and courage to
seek a path toward peace with the beorc.
Appears in Fire Emblem: Radiant Dawn.

Lion King Fang
Mt: 14 Range: 1
Grants Atk+3. If foe initiates combat, grants
Atk/Spd/Def/Res+4 during combat. At start of
turn, if unit is adjacent to only beast or dragon
allies or if unit is not adjacent to any ally, unit
transforms (otherwise, unit reverts). If unit
transforms, grants Atk+2, and unit can
counterattack regardless of foe's range.
This skill can only be equipped by its original unit.

"Gallia has no shortage of brave warriors eager for a fight. But will they ever reach their potential? Courage and strength alone are not enough. Knowledge is required. I can only hope they heed my words."

"Is the Veronica of this world anything like me? I must meet her."

Stay sharp, no matter what enemy you're up against!