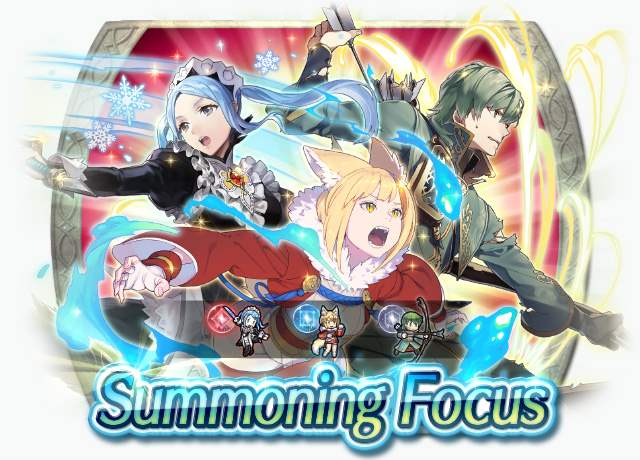 Three Heroes with the Iceberg skill, a Special skill that boosts damage by 50% of their Res, are available as part of a 5★ summoning focus!

Foxkit Fang
Mt: 14 Range: 1
Grants Res+3. At start of combat, if unit's Res
> foe's Res, and if foe uses sword, lance, axe,
dragonstone, or beast damage, grants bonus to
Atk/Spd/Def/Res = 50% of difference between
stats. (Maximum bonus of +8 to each stat.)
At start of turn, if unit is adjacent to only beast
or dragon allies or if unit is not adjacent to any
ally, unit transforms (otherwise, unit reverts).
If unit transforms, grants Atk+2, and if unit
initiates combat, inflicts Atk/Def-4 on foe
during combat and foe cannot make a
follow-up attack.
This skill can only be equipped by its original unit.

Sabotage Atk 3
At start of turn, if any foe's Res ≤ unit's Res-3
and that foe is adjacent to another foe, inflicts
Atk-7 on that foe through its next action.

"On the hunt! Let's get back out there and play some more!"

"If you find yourself too busy, please allow me to share in your burden. I'm more than used to all sorts of tasks. To be honest, I never feel quite right unless my hands are busy with some chore."

"This kingdom is as beautiful as the heavens themselves. This is not to imply it bests Frelia, of course. When Frelia's pegasi gather in Walles Forest... It's a spectacle of such beauty..."

"This is one Special you'll want to give to Heroes with high Res!"