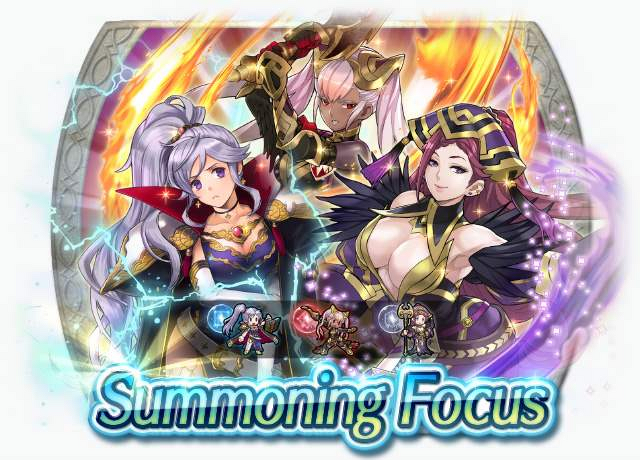 Three Heroes with Odd Wave skills, which grant the Hero and adjacent allies up to +6 to certain stats for one turn at the start of odd-numbered turns, are available as a part of a 5★ summoning focus!

Starting with this summoning event, it will be possible to summon certain Heroes at different rarity levels than were available previously. For details, please see the "Feh Channel Supplement" notice.

Strategist for Múspell, the Kingdom of Flame.
Likes to play tricks and manipulate people.

Thökk
Mt: 14 Range: 2
Calculates damage from staff like other
weapons. At start of turn, if foe's HP ≤ unit's
HP-3 and foe is in cardinal direction and
uses bow, dagger, magic, or staff, foe
cannot move more than 1 space through its
action.
This skill can only be equipped by its original unit.

Earthwater Balm+
Cooldown: 1
When healing an ally with a staff, grants
Def/Res+6 to all allies for 1 turn.
This skill can only be equipped by staff users.

C Duel Infantry 3
Grants HP+5. If unit is 5★ and level 40 and
unit's stats total less than 170, treats unit's
stats as 170 in modes like Arena.
(Higher-scoring opponents will appear.
Stat total calculation excludes any values
added by merges and skills.)
Cannot use:

"What a satisfying sensation... Hee-hee!"

The second princess of Múspell, the Kingdom
of Flame. She sees herself and the blade she
wields as one and the same, and keeps her
emotions in check.

Laevatein
Mt: 16 Range: 1
Grants Atk+3. Adds total bonuses on unit
to damage dealt.
This skill can only be equipped by its original unit.

"Be strategic, and make those odd-numbered turns count!"