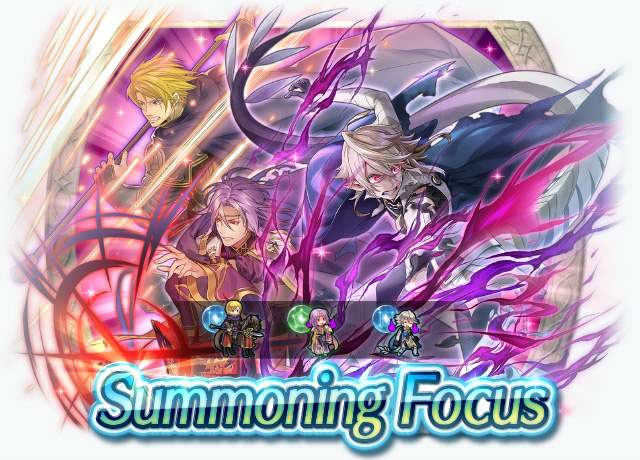 Three Heroes with Rouse skills are available as part of a 5★ summoning focus!

At the start of the turn, Heroes with a Rouse skill are granted up to +6 to certain stats for 1 turn if they are not adjacent to an ally.

Prince Lyon of Grado, having become a vessel
for the Demon King Fomortiis's power. It is
uncertain who directs his heart. Appears in
Fire Emblem: The Sacred Stones.

Blood Tome
Mt: 14 Range: 2
Grants Atk+3. If foe uses bow, dagger, magic,
or staff, reduces damage from area-of-effect
Specials by 80% (excluding Røkkr area-of-
effect Specials) and reduces damage from
foe's attacks by 50%, and if foe is also
colorless, grants weapon-triangle advantage
to unit and inflicts weapon-triangle
disadvantage on foe.
This skill can only be equipped by its original unit.
Note: The 50% reduction in damage from foe's attacks only applies to damage received from attacks during combat. It does not apply to damage received before or after combat from skills such as Deathly Dagger or Pain.

Rouse Atk/Res 3
At start of turn, if unit is not adjacent to an ally,
grants Atk/Res+6 to unit for 1 turn.
Cannot use:

"Is the Demon King controlling me? Or has he simply clawed his way into the dark corners of my mind?"

A prince born in Hoshido but raised in Nohr.
Within the blood coursing through his veins,
a brutal presence lies sleeping. Appears in Fire
Emblem Fates.

Brutal Breath
Mt: 16 Range: 1
Grants Spd+3. Grants Atk/Spd/Def/Res+X
during combat. (Calculates X based on number
of allies within 2 spaces of unit: 0 allies grants
+5; 1 grants +3; 2 grants +1; ≥3 allies grants
+0.) If the number of allies within 2 spaces is
≤ 1, inflicts Special cooldown charge -1 on foe
per attack during combat. (Only highest value
applied. Does not stack.) If foe's Range = 2,
calculates damage using the lower of foe's
Def or Res.
This skill can only be equipped by its original unit.

Atk/Spd Solo 4
If unit is not adjacent to an ally, grants
Atk/Spd+7 during combat.

Rouse Spd/Def 3
At start of turn, if unit is not adjacent to an ally,
grants Spd/Def+6 to unit for 1 turn.
Cannot use:

"I did not ask for a power like this. But without it, I could never hope to shape my future as I might now."

Knight General of Etruria. A model knight, he
has undivided loyalty to his kingdom. Appears
in Fire Emblem: The Binding Blade.

Prized Lance
Mt: 16 Range: 1
Accelerates Special trigger (cooldown count-1).
At start of combat, if foe’s HP = 100%, grants
Atk/Spd/Def/Res+4 during combat and inflicts
Special cooldown charge -1 on foe per attack.
(Only highest value applied. Does not stack.)
This skill can only be equipped by its original unit.

Lull Atk/Spd 3
Inflicts Atk/Spd-3 on foe and neutralizes foe's
bonuses to Atk/Spd (from skills like Fortify,
Rally, etc.) during combat.
Cannot use:

Rouse Def/Res 3
At start of turn, if unit is not adjacent to an ally,
grants Def/Res+6 to unit for 1 turn.
Cannot use:

"I will continue to strive to fulfill my duty as a knight."

These Heroes still fight for our cause, even if they have to go it alone!