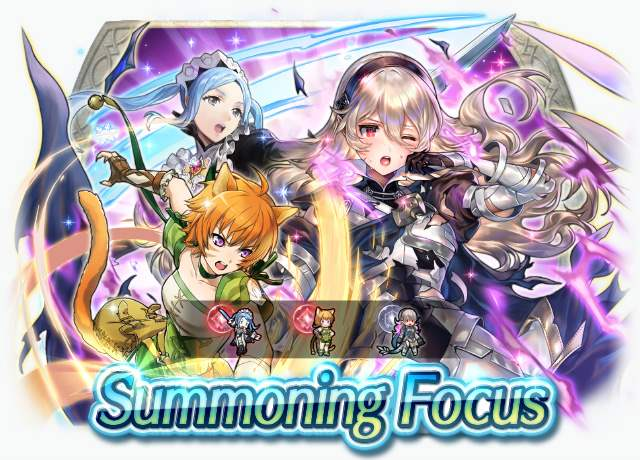 Three Heroes with Solo skills are available as part of a 5★ summoning focus!

Heroes with Solo skills are granted up to +6 to certain stats during combat if they are not adjacent to any ally.

A cat warrior from Gallia, the home of the beast
tribe of laguz. Once had a distrust of all beorc,
but that's slowly changing. Appears in Fire
Emblem: Radiant Dawn.

Spd/Def Solo 3
If unit is not adjacent to an ally, grants
Spd/Def+6 during combat.

Hone Beasts
At start of turn, grants Atk/Spd+6 to adjacent
beast allies for 1 turn.
Cannot use:

"You don't need to concern yourself with my well-being. Come find me when it's time to fight."

Unfortunate soul torn between both Nohr and
Hoshido, overtaken by the power lurking in her
blood. Appears in Fire Emblem Fates.

【Panic】
Converts bonuses on target into penalties
through its next action.
Cannot use:

"When there's a nice breeze, I can feel my blood cooling until, finally...comfort."

"I was just out gathering some wild plants. Would you like a cup of herbal tea? If you have the time, that is."