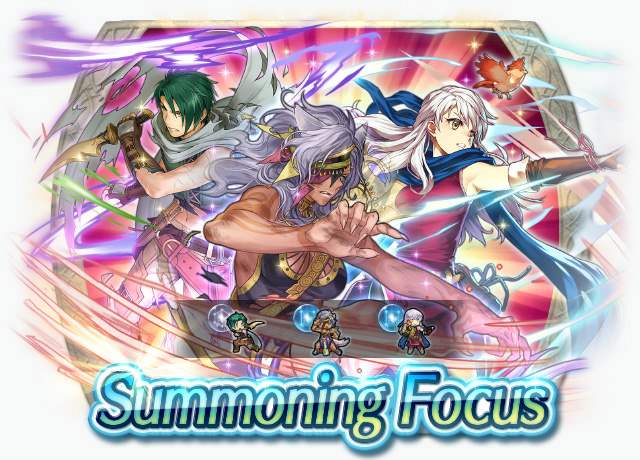 This time, Micaiah: Priestess of Dawn, Sothe: Zephyr, and Nailah: Unflinching Eye from among the bonus allies are available as part of a 5★ summoning focus.

A thief for the Dawn Brigade. He generally
shows little interest in others but tends to be
overprotective of his Micaiah, who's like a sister
to him. Appears in Fire Emblem: Radiant Dawn.

Peshkatz
Mt: 14 Range: 2
After combat, if unit attacked, inflicts Atk/
Spd/Def/Res-4 on target and foes within 2
spaces of target through their next actions,
and grants Atk/Spd/Def/Res+4 to unit and
allies within 2 spaces for 1 turn.
This skill can only be equipped by its original unit.

"No matter where I end up, no matter who I'm with...it won't change who I am or what I have to do. It doesn't change what matters to me, either."

Wolf Queen Fang
Mt: 14 Range: 1
Accelerates Special trigger (cooldown count-1).
During combat, boosts unit's Atk/Spd by
number of allies within 2 spaces × 2. (Maximum
bonus of +6 to each stat.) At start of turn, if
unit is adjacent to only beast or dragon allies or
if unit is not adjacent to any ally, unit transforms
(otherwise, unit reverts). If unit transforms,
grants Atk+2 and deals +10 damage when
Special triggers.
This skill can only be equipped by its original unit.

Glare
After combat, if unit attacked, inflicts status
on target and foes within 1 space of target
restricting movement to 1 space through
their next actions.
This skill can only be equipped by its original unit.

"I yearn for the warm desert wind. The air here is cold and clammy by comparison."

Nailah and Rafiel are really close!