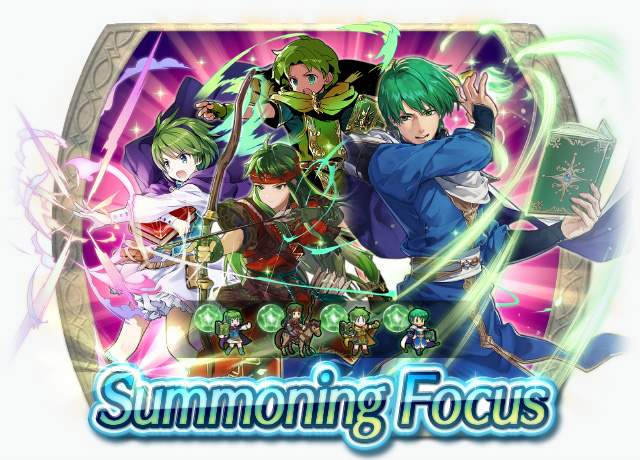 Just before the Voting Gauntlet: Green Grapple event begins, green-type Heroes are available as part of a 5★ summoning focus!

Iris's Tome
Mt: 14 Range: 2
Grants bonus to unit’s Atk = total bonuses on
unit during combat.
This skill can only be equipped by its original unit.

"I hope you'll read books to me a lot. I'm trying to learn how to read, so every little bit helps!"

Son of Silesse's pegasus knight Erinys. A hero
that stood up for the liberation of Meath.
Appears in Fire Emblem: Genealogy of the
Holy War.

Winds of Silesse
Mt: 14 Range: 2
Grants Spd+3. If unit is not adjacent to an ally,
grants Atk/Spd+6 to unit during combat.
This skill can only be equipped by its original unit.

Spd/Res Solo 3
If unit is not adjacent to an ally, grants
Spd/Res+6 during combat.

"My sister and I cannot help but aid those in need—it's in our blood. My mother is the same."

"I was looking at the stars. The sky here is not that of Sacae, but still, it calms my heart."

"Hello, I'm Lugh! I may look a little inexperienced, but I'm good with magic. It's great to be here!"

Green-type Heroes are essential for effectively dealing with blue-type foes!