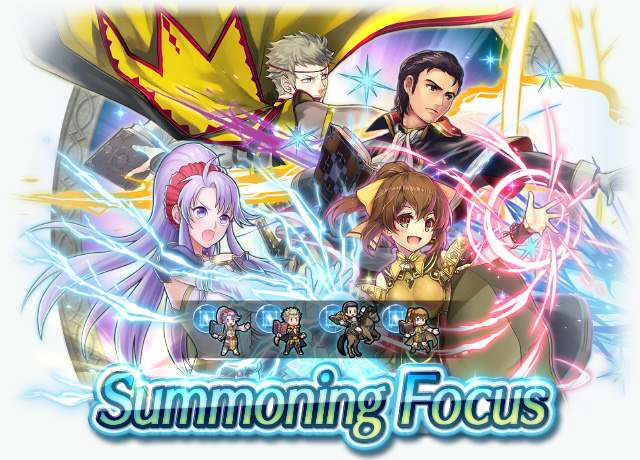 Just before the Voting Gauntlet: Clashing Thunderers event begins, four Heroes will be available as part of a 5★ summoning focus!

"Hi! I'm Delthea! When it comes to magic, nobody else comes close."

Formidable and admired mage knight
in Friege's army. Ever ready to lend
an ear to his younger sister, Olwen.
Appears in Fire Emblem: Thracia 776.

Blazing Thunder
Cooldown: 4
Before combat this unit initiates, foes
in an area near target take damage equal
to 1.5 x (unit's Atk minus foe's Def or Res).
Cannot use:

Goad Cavalry
Grants Atk/Spd+4 to cavalry allies within 2 spaces
during combat.
Cannot use:

"I am Reinhardt of Friege. Allow me to unleash havoc on your enemies with my thunder magic."

A noblewoman from Friege and descendant of
the crusader Thrud. She appears cheerful but
is hiding her troubles. Appears in
Fire Emblem: Genealogy of the Holy War.

"Everybody here is all talk, talk, talk about the most tedious stuff in the world. I'm so bored!"

A mysterious man who tends to be
overly theatrical. One of Leo's retainers.
Appears in Fire Emblem Fates.

Odin's Grimoire
Mt: 14 Range: 2
Adds total bonuses on unit to damage dealt.
This skill can only be equipped by its original unit.

"I specialize in probing beyond the ordinary words for weapons to find their true names of power! Missiletainn is the greatest such name I have ever known. I will give thought to what your weapon's true name is."

"Rumble, rumble—FLASH! Thunder and lightning are kind of scary..."