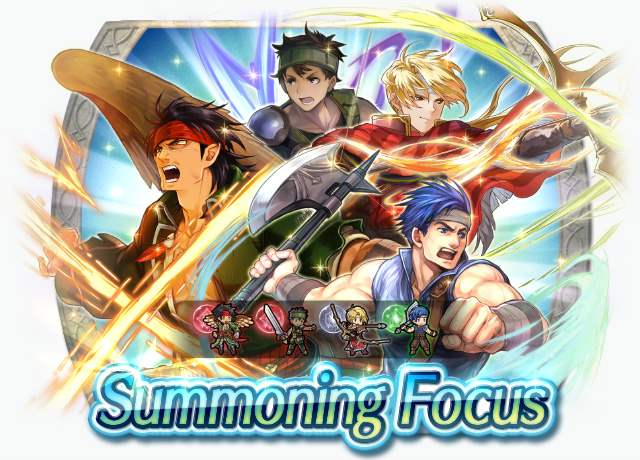 Just before the Voting Gauntlet: Headband Brawl event begins, four Heroes who have mastered the art of style will be available as part of a 5★ summoning focus!

King of Phoenicis, the nation of the hawk
laguz. Leads his people by dint of his
overwhelming fighting ability and charisma.
Appears in Fire Emblem: Radiant Dawn.

Hawk King Claw
Mt: 14 Range: 1
Grants Atk+3. If foe's HP = 100% and if unit
initiates combat, unit makes a guaranteed
follow-up attack. At start of turn, if unit is
adjacent to only beast or dragon allies or if unit
is not adjacent to any ally, unit transforms
(otherwise, unit reverts). If unit transforms, unit
can move 1 extra space. (That turn only. Does
not stack.) If unit transforms, grants Atk+2.
This skill can only be equipped by its original unit.

Archanean archer thought to be the best on
his continent. A skilled strategist. Appears
in Fire Emblem: Mystery of the Emblem.

Parthia
Mt: 14 Range: 2
Effective against flying foes. If unit initiates
combat, grants Res+4 during combat.
This skill can only be equipped by its original unit.

"Any nonsense you've heard about my prowess is spread by those who want to bring fame to my family."

Warrior of Talys who works for Ogma and
has been a pirate and woodcutter. Appears
in Fire Emblem: Mystery of the Emblem.

Knock Back
If unit initiates combat, target foe moves 1 space
away after combat.
Cannot use:

"These Heroes sure look cute in their headbands!"